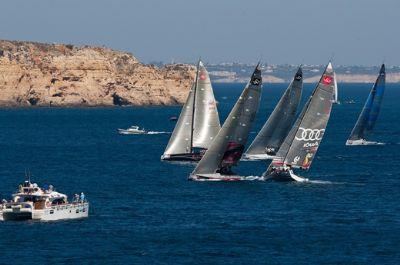 The Emirates Team New Zealand, under the command of Dean Barker, secured its third consecutive victory on this year’s Audi MedCup circuit in taking the season-ending Troféu de Portugal – Cidade de Portimão and were thus crowned 2009 champions in Algarve waters.

However, while Artemis also managed to close up during the early part of last week, a subsequent lack of wind leading to the complete cancellation of Saturday’s regattas, contributed to turning the Emirates lead into an unassailable one.

Portugal representative Bigamist 7 enjoyed a bright start in recording its sixth victory of the current season to temporarily rise into third place by Monday evening, but eventually finished fourth in the Algarve and in fifth overall.

Skipper Pedro Mendonça nevertheless declared himself more than satisfied with his crew’s performance, sentiments echoed in relation to the latest edition of the Portimão stage of the prestigious TP52 series in general by event organiser João Lagos Sport, competitors and spectators alike.