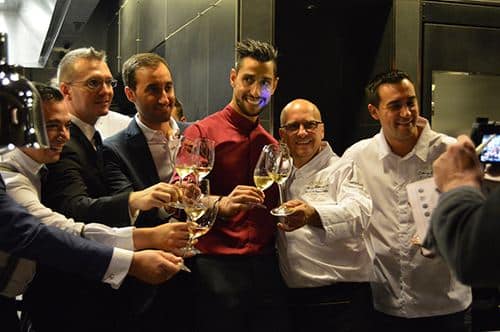 When seven city businessmen became stuck in a lift after a night out in London, little did they know that they were to become internet sensations.

The group had been out enjoying a meal at a Sushi restaurant in Canary Wharf when they entered the lift, designed for four people, just after midnight.

The lift became stuck and the men were then trapped for nearly four hours after no one managed to hear their calls and the emergency button failed.

One of the members of the group emailed pictures of the incident to his friends showing the seven bankers and traders stuck in the lift and then later asleep on the floor on top of each other.

This email has now spread through the city, causing those involved huge embarrassment.

A trader working at Canary Wharf told the Daily Telegraph: “Some of the senior executives are fuming about what happened. Mayhem in a lift is not brilliant for business.”

The source added: “We have been told that the lift was designed for only a small group of people. The seven men…were possibly a little heavier than normal after tackling the sushi.”