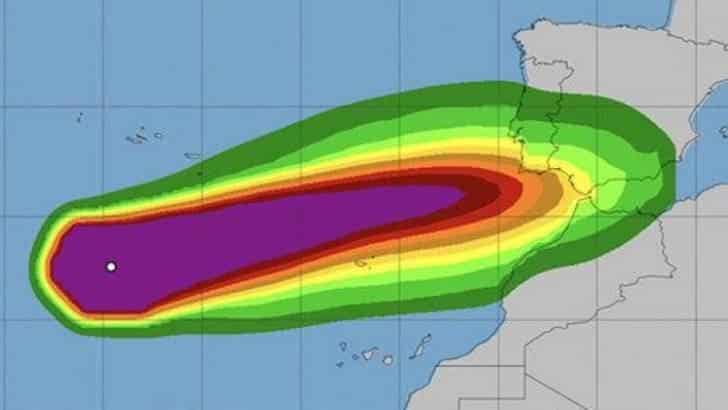 Last night Portugal’s Civil Protection authority was starting to admit that certain areas of the country could be in for some stormy weather. But this morning, media sites throughout the country and abroad are forecasting a ‘zombie storm’ of the kind not seen since 1842.

Hurricane Leslie has been “meandering a huge stretch of the sea since forming on September 23”, writes the Express, forecasting its imminent “crash into Spain and Portugal before the end of the weekend”.

Bloomberg suggests the crash will hit Lisbon on Sunday, preceded by hurricane-strength winds in various parts of the country.

Warnings in place include concerns that the winds could fan any outbreaks of fire.

Lots of rain is expected ,with the areas of the north and centre likely to be worst affected.

In Madeira, Leslie’s trajectory has already led to the cancellation of dozens of flights, and the latest reports this Saturday mid-morning from TSF radio are that “there is a very high probability of hurricane Leslie hitting the west coast of Portugal as a post-tropical depression”.

A source for sea and atmosphere institute IPMA says conditions will start to worsen early this evening, with high winds gusting at up to 120 km/ hour between 7pm today and 7am on Sunday.

Strong waves and thunderstorms are also expected as the entirety of the western coastline has now passed from orange alert to red.

All the habitual storm warnings are in place, with people advised strongly against activities in or by the sea and warned to check on any potential blocked drainage outlets, or loose structures that could be whipped up by advancing winds.

Civil Protection sources interviewed for lunchtime television also stress the advice that people should not be out on foot between 11pm this evening and the early hours of Sunday morning.

Leslie has been labelled a ‘zombie storm’ due to its ‘wanderings’ since forming over the middle of the Atlantic and surviving on warm waters and moisture resulting from this extraordinarily hot summer.

But its sudden contact with a strong weather front passing over the UK has seen it start what tabloids describe as “barreling” its way towards the Iberian Peninsula.

Says Bloomberg, however much wind or rain Leslie ultimately brings, it will be “unprecedented” for this corner of Europe – the last storm of these proportions being recorded in 1842 in Spain.