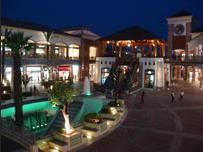 CHRISTMAS lights are already shining brightly in some of the Algarve’s streets, Forum Algarve has had its decorations up for weeks, Santas are already sitting in their grottos across the region and the sounds of Christmas carols can already be heard over sound systems.

The problem is that no matter how festive the shops and shopping centres look or how original the Christmas entertainment, this cannot make people suddenly forget the country’s recession.

The current outlook appears to be one of slow sales amid a stagnant market for retailers this Christmastime, with the general public tightening their purse strings and many spending around the same amount or less on Christmas presents than last year.

According to Paulo Reis, president of the Associação Comercial de Portimão (ACP), the Portimão Business Association, sales fell by around 20 per cent in 2005 against the previous year and he expects the borough’s retailers’ performance this Christmas to be similar to last year.

“Many families are finding themselves in debt and the competition for sales is greater than ever this year,” he said.

In desperation, many shops across the region will have longer opening hours than ever this December in order to try to increase sales volume. For retailers, success over the Christmas period is often key to their survival, as for many, sales during December represent 25 to 30 per cent of the total for the year.

João Rosado of the Associação de Comércio e Serviços da Região do Algarve (ACRAL), the retailers and service providers association of the Algarve is slightly less pessimistic: “I believe that business this year will be similar to last year, which, despite everything was not that negative.”

The Resident also attempted to contact the management of Forum Algarve shopping centre in Faro and Algarve Shopping in Guia to comment on the outlook for the coming month, but no-one was available for comment.

So, will the recession condition consumer spending this Christmas? The Resident spoke to a few members of the general public for their personal views.

“I haven’t started shopping yet, but I’ll probably still spend the same as last year, which is around 350 euros,” Susana Ferreira of Faro told The Resident.

“I’ll spend the same anyway, despite the recession. You can’t cut back on Christmas. I spend around 300 euros and normally just buy big gifts for the children in the family,” said Carolyn Schuler from Loulé.

“I’ve noticed the prices seem to be more expensive so yes, I may have to spend less on each person this year. I’ll probably spend the same in total as last year, which is around 500 euros,” said Luis Monteiro from Albufeira.

“Toys are very expensive even if you shop around. I will spend less this year, probably between 250 and 300 euros. Even if I buy lots of smaller gifts it shouldn’t matter though because it is the thought that counts,” said Donna Encarnação from Lagoa.

“With tax at 21 per cent on clothing it means I probably will have to go Spain if I want to buy clothes as presents this Christmas. Everything seems to be expensive in Portugal at the moment, so I will have to look harder for bargains and may end up spending less on each person,” said Helen Pilgrim from Montenegro.

“For me, Christmas will always be Christmas,” said Steve Harper from Almancil. “I’ll never cut back as it is a time for celebration!”