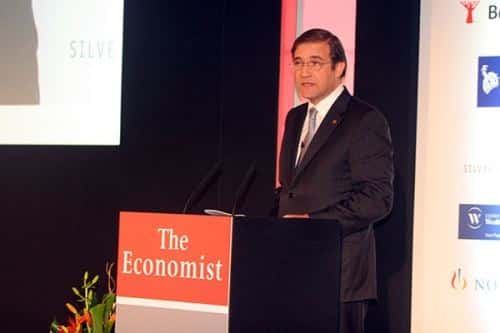 In a week where PSD leaders jubilantly affirm “Portugal is better!” grim statistics reveal it to be anything but. There are more new unemployed than ever before, more families with both parents out of work, more people living rough on the streets and more unrest bubbling under the surface than newspapers have space for print.
In the words of armed forces figurehead Coronel Pereira Cracel, “the country isn’t better for anyone at all … it is only better for the people responsible for the situation we are in”. This is the reality behind today’s powder-keg Portugal.
As the Troika returns with what many predict will be yet more demands for austerity, the media is left digesting the week’s latest ‘horror stories’.

Return to politics of Miguel Relvas

It all began at the PSD congress in Lisbon at the weekend, where Prime Minister Pedro Passos Coelho declared the country was “better off” than it had been two years ago. Why, he wondered, did there exist in the public arena “this wish to not recognise that we are better?”
Booed by crowds as he arrived at the three-day congress, the speech was nonetheless applauded by the party faithful inside.
Day two, however, saw a hiccup. The return to the fold of disgraced politician Miguel Relvas – nominated to head the party’s national council by none other than Passos Coelho himself.
For an administration that vowed to do away with the “corrupt image” of Portuguese government, this was seen as a crass move, to say the least.
“An unimaginable madness” was how one delegate put it, speaking to Público newspaper at the weekend. “There was nothing to suggest that Relvas would be chosen for the job”, added the delegate – who asked to remain anonymous – while other party militants “reacted with indignation”.
Best known for reportedly having obtained, at age 47, a university degree without taking any classes or exams, Relvas has also been associated with a number of political scandals and “ethical and legal issues”.
“A flagrant problem of lack of shame” was how PSD renegade António Capucho classified Passos Coelho’s decision – but the bottom line was that the news served only to crystallise the opposition’s mantra that political leaders are “living in another world”.
A little like the story of the Emperor’s New Clothes, political leaders are seen not so much to be gilding the lily, but talking about a country that simply does not exist.

Hours after the PSD congress disbanded, news came that unemployment in Portugal grew last month at the “rhythm” of around 500 people a day.
The number of university graduates without work also worsened once more compared to the same period in 2013, and out of the 705,327 jobless in the country, around 330,000 (47%) are not entitled to any form of unemployment benefit.

On the same day, IEFP (the employment and professional training institute) reported that the number of families where both wage earners were out of a job had increased on the same period in 2013, reaching 13,250.

…and more people living rough on the streets

Easier to face than reality, statistics become “impossible to quantify” when it comes to the number of people living rough on the streets, writes Público – but “the number is increasing with the crisis”.
On a night of census-taking in Lisbon alone, volunteers were able to identify 852 homeless people in the capital, 509 of which were sleeping on park benches, under bridges and in alleyways.
Ana Nascimento of AMI (international medical assistance) told Público that in the last year the service had taken on 549 new cases in a total of 1,679 – a number of which were people who had run into debt as a result of sudden unemployment.

And as the week got into its stride, Correio da Manhã carried the story of 8,693 nurses leaving the country over the last four years as the public health service is daily described as in a “state of rupture”.
Add to this the fact that “a mass protest” by police is planned for next week (March 6), and there are rumblings of extreme discontent in the armed forces, it is easy to see how some might think the country may not be “better” at all.
Nevertheless, as the Troika knuckles down to determine the “sustainability” of Portugal’s “economic recovery” much-publicised by political leaders, Passos Coelho did concede at his party’s conference that the way ahead was still fraught with uncertainty.
“The period we have ahead of us isn’t going to be any easier,” he told delegates, suggesting, yet again, that the best option still lies in “political consensus” – something that has been impossible to forge with Socialist opposition up until now.
Political commentator José Pacheco Pereira would seem to know why. Writing in Público over the weekend, he said: “If we look closely, the source of the speeches that tell us to accept a reduction in sovereignty, a diminishing of parliamentary powers, a future of 20-30 years in which a possible economic recovery will not translate into a social recovery”; speeches where “there is not one word about work, or its social value”; speeches where “there is a monocord repetition of the word “companies” with the “effective abandonment of any preoccupation or measure against the impoverishment of the long-term unemployed, or those that have lost hope” – then those speeches will be seen to have come from “the government of the PSD and the Prime Minister”.

As the Troika rolls up its sleeves for the 11th review of Portugal’s adjustment programme, there are five “significant” risks on the horizon, highlighted in an article by Peter Wise of the Financial Times this week.
1. Wage levels still remain too high, says the Troika.
2. Export growth “could prove unsustainable”. This is something the government is hot to refute, but the IMF remains unconvinced.
3. Structural reforms have not been deep enough. “The IMF says Portugal still needs to ‘address decisively’ the persistence of excessive rates in energy, transport infrastructure and other areas crucial to external competitiveness,” says the FT.
4. Companies need more credit. “Portugal needs to step up efforts to ‘reduce the overhang of private debt and free up credit for lending under better terms’ to help increase private sector investment, says the IMF.”
5. More reforms could be blocked by the Constitutional Court.
Whichever way you look at it, Portugal is a powder-keg. The clock is ticking.

“Broadly on track” with “significant risks”

EC || As the Troika returned to Portugal for its 11th bailout review – expected to last up to two weeks – the European Commission has pronounced on the country’s recovery so far.
A little like saying “sunny with a chance of rain”, Reuters news agency reports that the EC said on Thursday that Portugal’s bailout programme remains “broadly” on track with “significant” risks.
The outlook was based on the commission’s summary of the 10th review of Portugal’s performance under the bailout, which took place in December.
“While the baseline projection implies that the recovery becomes gradually more entrenched, downside risks remain significant,” were the commission’s actual words.
The risks “first and foremost of a legal nature” are anticipated as the Constitutional Court debates a number of austerity measures from this year’s budget that have been challenged by the opposition, says Reuters.
At the same time that the EC made its declaration, the IMF released a statement alluding to the “formidable challenges” that still lie ahead for the Portuguese government.
Reuters continued: “The government has not played down the challenges” and has done well so far, issuing two bonds this year and covering “all of this year’s financing needs”.
Also hedging bets on Portugal’s economic recovery is ratings agency Fitch. It balked at raising Portugal’s credit rating from “junk” to investment grade, said the news agency, simply saying that Portugal is “moving in the right direction”.
Fitch is another institution that suggests Portugal would benefit from a precautionary credit line once the bailout ends in May this year, adds Reuters.
By NATASHA DONN news@algarveresident.com
Photo: Chris Graeme