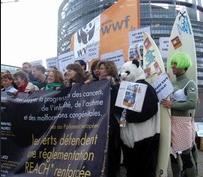 One of the final pieces of legislation voted through the European Parliament at the end of 2006, was perhaps the most important – and certainly the most controversial.

The subject was the Registration, Evaluation and Authorisation of Chemicals (REACH), a topic that has drawn intensive interest not just from industry, but from Green lobby groups and our very own Women’s Institutes. All are formidable campaigners, but, as Tony Blair found when he attempted a political speech at their Annual General Meeting, the most formidable of them all is the WI. Their members have written, e-mailed and even visited the Parliament in person. They had good reason.

At issue has been a general concern that there are many chemicals in use today that have never been properly tested. Those most concerning are the “bio-accumulative” chemicals that can build up in the body, not just in humans, but also wildlife. The 3,000 chemicals introduced onto the market since 1981, have all been subject to stringent technical tests, with appropriate restrictions placed on their use as a result. But, thousands of chemicals in use before that date have never been tested and thus have less restrictions. It has been easier for industry to make greater use of the untested ones – hence the need for REACH.

The problem was that the original commission proposal called for the full testing of 30,000 chemicals. This was considered by many to be disproportionate and impractical – with at least 12 million animals being required for such testing before being killed, which was considered by many to be immoral. The challenge has been to agree a balanced proposal that addressed the genuine health and environmental concerns, without depriving industry and consumers of the many benefits that certain chemicals may bring and without smothering small businesses in yet more red tape.

The result hammered out by the European Parliament has generally been labelled a win-win situation for health, for the environment, for animals and for business. A priority list and timetable for testing has been firmly established. From June 2007, there will be a specific obligation on manufacturers to produce plans to replace dangerous substances with safer substitutes. The burden of proof will now be on companies to show that their products are safe. Alternatives to animal testing will be actively promoted, funded and validated. At the same time the new regulation will simplify and replace some 40 different EU directives.

Despite the on-cost to industry, the Confederation of British Industry (CBI) and small business groups have signed up to the new regime. The “Eurogroup for Animals” has welcomed the significant decrease in animal testing. The WI have gone quiet. Maybe MEPs have actually got the balance right.