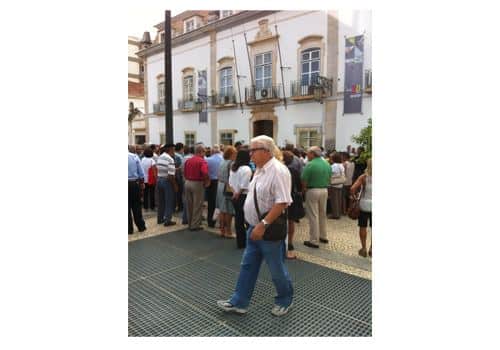 Outrage || At least 500 angry ratepayers showed up in force at Portimão town hall on Tuesday to protest against the council’s introduction of a new ‘tax’, purportedly raised to fund civil protection services.
Moods have been rising since locals began receiving letters about the levy charging 0.02% on property values each year.
Shouting “enough robbery” and “we won’t pay!”, Mayor Isilda Gomes and her officials were left in no doubt as to what the borough’s citizens thought as they presided over a meeting to rubber-stamp the ‘Taxa Municipal de Proteção Civil’, as the new rate is called.
As ratepayer Madalena Augusta told Lusa news agency: “They have already stolen from our pensions and now this tax will worsen family budgets. I would agree if they asked for a euro or two and the money went directly to the firefighters. This way we don’t know where the money goes.”
Indeed Mayor Gomes has dug a hole for herself, giving two different reasons as to why the tax needs to be paid.
In 2012, she blamed it on the previous bankrupt administration’s application for government PAEL funding. But last month, when the council invested in the purchase of a new fire engine (80% funded by the EC), she told the Resident the tax was required because “all citizens must permanently help those who are on the ground making sure we are safe”.
Carlos Bicheiro, a Portimão lawyer and economist who took part in Tuesday’s outraged demo, told Lusa news agency that the tax is “nothing more than a way for the council to get more money out of its population to balance its accounts”.
Elsewhere in the crowd, resident António Marreiros said the tax was “shameless and an abuse” of local people, adding that Portimão already has the highest (IMI) property rates possible.
A last-ditch attempt by Left Bloc and Servir Portimão councillors to veto the new tax failed and an unrepentant mayor said: “It was my duty to implement this tax. If the citizens don’t pay, the responsibility is theirs.”
It now remains to be seen what householders will do. The mood of the crowd was certainly not to pay. “I hope no one pays!” António Marreiros told us.
A similar ‘civil protection’ tax is already levied in Vila Real de Santo António and Albufeira. While the VRSA charges €1 per month, Albufeira’s tariff ranges from €0.80 for private ratepayers to €5 for business property owners.