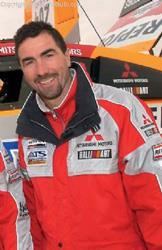 THE CONCLUDING week of the intercontinental race, which began in Lisbon on New Year’s Eve, was married by the death of one competitor and two bystanders. In separate incidents, two children were killed by a competitor car and service truck, in Guinea and Senegal respectively.

On the sporting front, multiple winner and defending champion, Stephane Peterhensel, looked set for another victory, until losing three hours in an accident. Chasing Jutta Kleinschmidt, met a similar fate and was forced to drop out. That left Peterhansel’s Mitsubishi team mate, Luc Alphand, a former ski champion, to wrap up his first ever win, with South Africa’s Giniel de Villiers and Spain’s Nani Roma taking second and third. Portugal’s Carlos Sousa finished in a credible top 10 position, while debutante Carlos Sainz looked like a certain future winner.