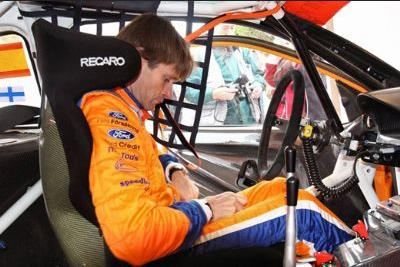 The return of former world champion Marcus Gronholm after a year’s absence will be the major attraction at the April 2 to 5 2009 Vodafone Rally of Portugal based around the Stadium of the Algarve.

The Finn has secured a debut drive in a Prodrive Subaru, hoping to challenge old rival and five-time world champion Sebastien Loeb (Citroen), who will be the favourite for the FIA World Rally Championship stage, along with the biggest field assembled this season boasting 74 teams representing 28 countries from five continents.

Portuguese hopes during the four-day spectacle, which will pass through Ourique, Silves, Malhão, Santa Clara, Almodôvar, Vascão, Loulé and São Brás de Alportel in between special and super-special stages in the stadium itself, will rest with Bruno Magalhães (Peugeot) and Armindo Araújo (Mitsubishi).

The two had a chance to warm up before then when forming part of a 250-team strong field contesting the 27th Trans-Portugal Accenture ‘Raid’ open to 4×4 vehicles, quads and motorbikes. The country’s biggest non-professional all-terrain race took place without José Megre for the first time since 1986, after the contest’s founder died earlier this year, and took in the lower Alentejo as well as the Algarve between February 28 and March 1.

That Eastern Algarve city is also the venue for the Tavira Rally this weekend constituting the second stage of the season-long regional Salenia Trophy organised by the Algarve Motor Club. Leading the competition after the Salir opening event are António Lampreira (cars), Eduardo Vieira (bikes), João Simões (quads) and António do Val (buggies).