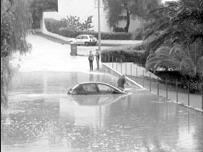 HEAVY SHOWERS across the Algarve this month have caused structural damage to many houses, with emergency services responding to hundreds of calls for assistance.

Strong winds and heavy rain in Albufeira left three people displaced from their home as the weather caused severe damage to their roof last week.  The islands around Faro experienced what locals described as a small scale cyclone on the evening of November 16. The island of Culatra was the most affected, where the storm took the roof off one house belonging to a fisherman and his family. Luckily the family was at a neighbour’s house for dinner when the storm hit the island.

Faro’s Câmara President, José Apolinário has promised that he will do everything in his power to work alongside the islands residents association to help those affected by the heavy rains and strong winds. Residents on the island of Farol were also affected and several lifeguards were on call to answer pleas for assistance.

In Olhão, the maritime police launched a rescue operation to save a French sailor stranded aboard his boat, which was in danger of crashing into the Olhão port wall due to the large waves. He was rescued unscathed.

Although there have been no reported injuries from the bad weather, the damage to homes will run into tens of thousands of euros.