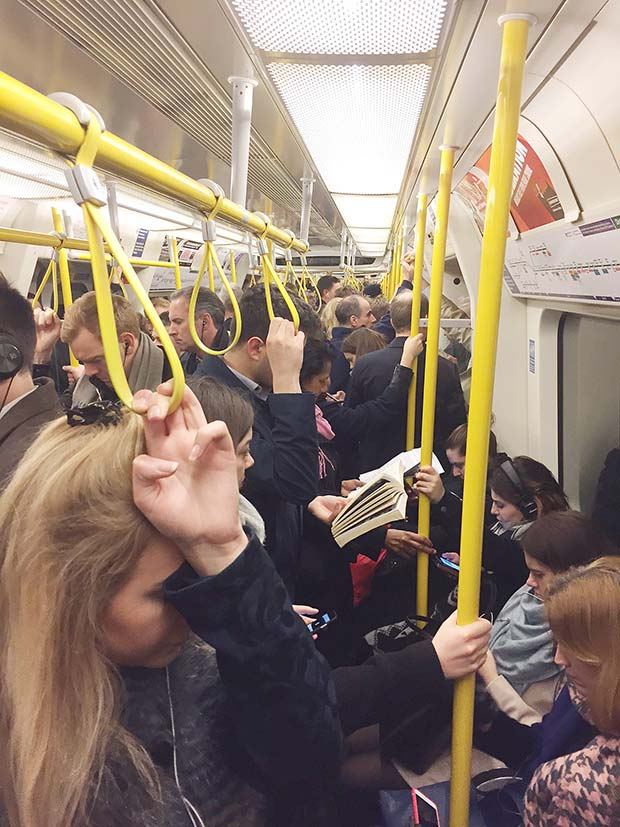 Let me share a personal London experience with you. “Empathy is something, reality is something else.” This is what the exasperated traveller to my left said when a woman asked him to think of the person trying to get on the tube train at rush hour. Rewind 10 minutes when I got on an already packed District Line tube train at Westminster one Tuesday evening in rush hour. A seat was not even an option as we all tried to cling to something when the train lurched away from the station and avoid that thing that Londoners hate most – personal contact or, heaven forbid, the need to talk to each other!

Eighty per cent of people are staring at their phones, mostly with headphones plugged into their ears, watching films or playing a weird game that looks like some sort of Space Invaders with fruit – I think it is called ‘Candy Crush’.
Whatever, it looks a very odd thing for grown ups to do. Others are ferociously attacking their phones with their thumbs with a dexterity and speed I can only admire, posting stuff on Facebook, WhatsApp or Twitter. A few people are reading books and one or two like me are trying to read the London Evening Standard thrust into our hands as we entered the station. At every stop, about two people get off and impossibly about 10 more get on at every door.

Slowly, what little personal space and humanity you have is eroded. The hardy few still try to look at their phones or books or papers but there is no room to do anything. You are up close and personal to others – the way they look, their spots and imperfections, their body odour and their perfume, it’s all there and in your face.

Then, thank God, we arrive at Earls Court and loads of people get off. You can breathe and you can start to Candy Crush again. Be grateful, very, very grateful, you live and work and travel in Portugal!

London may have more parks and open spaces than any other comparable city in the world but pollution continues to ravage the capital. Earlier this year, one Sunday night, levels of deadly nitrogen dioxide reached record levels. This was particularly shocking as a Sunday evening would usually see low levels of pollution with relatively fewer vehicles on the road – so what was going on? It seems it was due to a particularly low level of prevailing wind – but also, on a cold night, the increased use of wood-burners by Londoners.

The famous smogs in the 1950s led to the Clean Air Act 1956 which banned open fires in London but a loophole in the law allows most wood-burning appliances to be used and these have become very popular. It seems further lawmaking will follow but, meanwhile, combating diesel fumes seems to be the main target for the authorities. From this October, older diesels entering London will have to pay an additional £10 congestion charge so maybe a handy, politically correct way of raising extra revenue as well? Perish the thought.

Meanwhile, the Metropolitan Police has announced plans to introduce 250 hybrid electric cars in a general overhaul of its 4,000 strong fleet. These will include hydrogen fuel cell vehicles being used in front line emergency response for the first time. They have not been buying diesel cars since 2015 and will be using the BMW i3 initially.

Head of Fleet Services at the Met, Jiggs Bharij, said: “[We] are leading the way in the police sector. Our aim is to make the fleet as clean as we can while maintaining operational capability. These first vehicles are a stepping stone that will allow us to build the volume over time once we have the right technology and infrastructure in place.” Let’s just hope the charge doesn’t run out when they’re playing Grand Theft Auto around the streets of London!

Then there is a little evergreen corner of North London which is trying to go that bit greener. Lord’s cricket ground has announced that all of its power will be provided by renewable resources, including solar panels on the roof of the Warner Stand. And Heathrow airport, somewhat ironically Europe’s busiest airport, is giving cash incentives of up to £2,000 (€2,400) to staff to ditch their diesel cars. Much ado about something then!

Down by the riverside

There are beautiful walks along both sides of the Thames where you can take in some of London’s most iconic sites but following the Thames Path can be a little disappointing in places when you are forced to walk in land around various buildings and streets.

Well, thanks to the stunning redevelopment project at Battersea Power Station, a path, right beside the river, has opened for the first time in 90 years. With the first new residents moving in this month and some exciting shops and restaurants planning to open in the first phase, known as Circus West, this exciting project will become a destination in its own right. The Malaysian backed scheme will see this area, which has been derelict since the 1980s, come back to life in what Rob Tincknell, Chief Executive of the development company, describes as “a new riverfront neighbourhood for London”.

Slowly the iconic chimneys of the original listed power station, which was de-commissioned in the 1980s, are being painstakingly dismantled and replaced. The originals were simply too corroded by years of carbon pollutants belching out over South West London.

Definitely more than just a nice walk then.

Well, they might be if they are members of the exclusive Annabel’s nightclub in Mayfair. Owner Richard Caring has invested £55 million (€64 million) in a new venue, a beautiful townhouse in possibly the most prestigious square of this very smart neighbourhood. New members and those up for renewal have seen steep increases in annual fees – and they are not happy bunnies. According to London’s Evening Standard, one un-named, disgruntled member exploded: “Even my richest friends say he [Caring] can f**k off.” Charming – don’t you feel sorry for these underprivileged people, struggling to make ends meet?

Just a few doors down from the original basement club, famous for being a regular haunt of the rich and famous, including the Prince of Wales, Richard Nixon and Aristotle Onasis, the new Annabel’s annual membership fee is £2,700 (€3,100). Surely not too bad in an area where a two-bedroomed apartment can easily cost you more than £5 million (€5.85 million)!