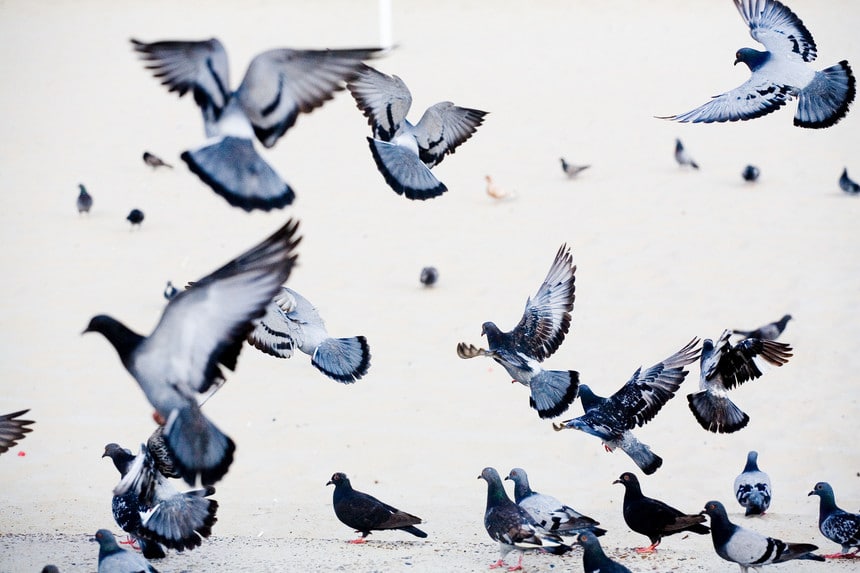 For anyone bemoaning the state of Portugal’s weather over the last few days, just thank your lucky stars you are not a racing pigeon.

Hundreds of them have been horribly confused by the inclement conditions – to the extent that a Porto-Algarve event has seen many blown right off course into Spain.

Spanish authorities are ‘on the case’ and doing their best to inform the concerned Portuguese Federation of ‘Columbofilia’ (pigeon racing).

This is not a laughing matter. Of the roughly 10,000 birds that took part in the Porto-Algarve ‘race’ (described as ‘athletes’ by the sector that prizes them), only 3,000 so far have returned home.

“Many of these birds, marked with a coloured ring on each foot, are being rescued in Galicia and Asturias, more than 500 kms from the starting point” of the event, explains DN.

A Federation trailer is on its way to Spain today (may even have arrived by now) hoping to load up with 138 birds that have been recovered – some described as ‘veritable stars’ of their sport (the ‘Cristiano Ronaldos’ of pigeon racing no less).

Said José Luiz Jacinto, president of the ruffled Federation: “We have a meteorologist working with us, making forecasts. This Saturday for example we had to delay another race because conditions weren’t right to let the birds go. But last weekend something ‘abnormal’ happened. It wasn’t detectable over the radar – and it meant that the weather really disoriented the birds. Many could have entered the sea and had difficulties getting out. Many alighted in the Berlengas (islands), others got lost in the Alentejo – and some ended up in Galicia…”

It is here that El Pais (Spanish daily) has picked up on the drama, explaining that a pigeon-fancying policeman, Enrique Garcia, had been noticing that every time he let his birds ‘go’, they came back with new friends… He was able to see from these birds’ rings that they came from Portugal.

Garcia set about giving the birds food and shelter (they were ‘hungry and exhausted’) and then he contacted the Portuguese Federation of Columbofilia.

Once El Pais reported on this story, more reports started coming in from other Spanish pigeon fanciers who have found themselves hosting newly-arrived Portuguese birds.

Over 50 have been recovered in various Galician municipalities – most of them quickly revived with food and rest.

Insists DN, “these birds are real athletes”; the sport of pigeon-racing in Portugal is vibrant. Indeed, it is considered to be the “second national sport in terms of fans” (presumably behind football, though this is not explained).

Every week “50 trucks release Portuguese pigeons” as their owners wait (usually without this level of stress) for them to return.

Portuguese ‘derbies’ are international events with thousands of participants, the paper continues. The simple process of entering a bird for a race “can cost up to €300”, while the birds themselves change hands for thousands (which is nothing in comparison to prices in northern Europe).

So if anyone spies a tired-looking pigeon (with professional rings on its legs), the best course of action is to catch it (they are not afraid of people) and then contact the Federation (on 910 729 544).

To date the furthest a Portuguese racing pigeon seems to have flown off course is 2,222 kms, straight into a bucket of paint in Plymouth, UK (click here).

UPDATE: Monday saw a farmers in Austria contact the resident for the email details of the Portuguese federation of racing pigeons. They too have received a bird ‘fitting the description of the Portuguese racing birds’ and are giving it food and shelter in their loft full of farm pigeons. “It is very tired”, writes Karen Zierler but does not appear in the least bit phased that it is sharing quarters with birds of lesser feather.