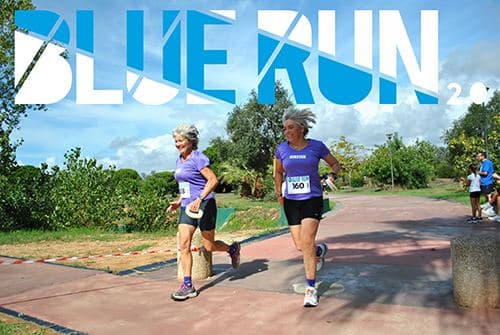 Quinta do Lago will be the setting for the second ‘Blue Run’, to take place on May 3 as part of Loulé’s ‘European City of Sport’ celebrations.

Featuring a 10km race and a 7.5km walk, the event is open to everyone as long as they wear a blue t-shirt (provided by the organisation).

The Conrad Hotel is the starting point for both events, with the walk beginning at 10am and the race half-an-hour later.

Big prizes are promised, including paid stays at the Conrad Algarve Hotel, spa treatments and other “surprises”.

The entrance of the hotel will also be turned into a party lounge at midday, allowing participants to socialise and children to play in the specially set up playground.

‘Blue Run 2.0’ is being organised by Associação Dinamika with the help of Loulé council, the Conrad Hotel, InfraQuinta, Quinta do Lago and the parish council of Almancil.

Anyone can sign up for the event on the online pages of Bilheteira Online, Dinamika and Bluerun as well as at Fnac, Worten, Sportzone and CTT post offices.

Admission is free for children up to the age of 12.