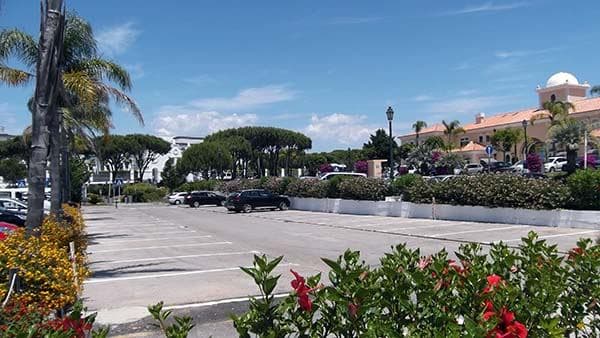 It is an old quarrel but one that continues year after year. As municipal company Global Loulé prepares to re-introduce a payment scheme at the parking lot of the Bougainvillea Plaza and Quinta Shopping, in Quinta do Lago, Loulé, shopkeepers have once again begun complaining, saying the plans spell financial ruin during the busy summer months.
Michael Ferrada, who runs an office in the centre, told the Resident: “They are putting up shading over the parking spaces, but their real plan is to make money off the parking lot at the cost of local trade.”
Last year, Ferrada claimed the 80 spaces were rarely more than a quarter used when the charges came into effect through the months of July and August.
Now, even before parking needs to be paid for, the carpark is nowhere near half full.
“If it isn’t half full now, how many people will use the carpark when they need to pay for it?” he queried.
A spokesperson for Global Loulé confirmed it is in the process of setting up shading but cannot confirm when charges will begin. “Most likely when the shading is completed,” he told the Resident.
For now, shopkeepers are drawing up battle plans.
“A petition against the tolls is being created,” Ferrada told us – adding that he believes it will be wholeheartedly supported by the local resident and business community.