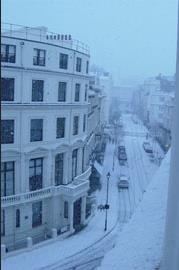 Here we go again. Today saw me journey from Faro to London to begin three months work, teaching in the UK, in order to make ends meet in Portugal.

The golden rule on arrival in the UK is never to complain about your lot in life. Three months teaching, rising at half six in the morning may seem nightmarish, when compared to our Algarve lifestyle, but it is heaven when compared to having to do it for 12 months of the year. Today’s journey, involving me, a rucksack, a bike and a friend, began with a leisurely breakfast at the Faro Ibis hotel, followed by the five minute drive to the airport. The coiffured lady at check-in managed to combine heartfelt hatred with impeccable manners. The aura around her was nothing short of menacing, although the words that left her lips were word perfect institutionalised politeness. As she told me to enjoy the flight, I had a momentary vision of the plane exploding in the air and her smiling serenely.

Arrival at Stansted afforded the usual confusion, as it quickly became apparent that no-one knew how my bike would be delivered. The man at lost luggage, who was so helpful six months earlier that I’d assumed he was retiring the following day, told me to go to pick-up point A. Everything, bike and rucksack should arrive there. At pick-up point A, a notice informed me that large luggage would now go to pick-up point B and only to wait at pick-up point A if I had been directed here.

Day one of cycling to school. The 10km journey to school took me 45 minutes. On the way home I got a puncture. Foolishly, I diagnosed this as a slow puncture, so decided to persevere with my journey and ended up stopping eight times to inflate the tyre.

Day two of cycling to school. As I reached over to turn the front light off, I slipped and the entire thing flew off and smashed into pieces. I made a mental note to avoid cycling near this new puncture hazard. Tonight’s puncture happened close to Halfords (a bike shop), so I was able to nip in, buy a stock of inner tubes (be prepared) and use their equipment to change the tube.

Day three of cycling to school. Today’s first puncture occurred before leaving school in the evening. I changed the tube over efficiently, only to discover the pump had broken. Fortunately, the school caretaker was able to use his car pump for me. The second puncture occurred five minutes later in the other tyre. I pushed the bike to the station and took the train home, glaring at anyone who dared look as if they might challenge my decision to bring a bike on a crowded commuter train – no-one did.

The entire weekend has been spent on bicycle maintenance – new tyres, new inner tubes, new lights and so on.

You will be pleased to hear that I have had a puncture free week. Back home in Monchique, Martyn has been diligently planting peas and trying to start tomato plants off early in a cold frame. The mongoose has made its annual January visit and has killed one turkey and a hen. Martyn has made some repairs to the fencing and bird house to try to keep them at bay. He has also decided it will be a good idea to kill as many as possible himself, before the mongoose can get to them, so he has had a mass slaughter day, killing five turkeys.

After the second killing, no hen, duck or guinea fowl would come anywhere near him. Turkeys however, not known for their common sense, continued to approach him, oblivious to the evident danger. His mother, who is staying at a neighbour’s house, is currently boarded in until all the killing is over.

Martyn’s pampering of Eggs (pregnant pig) has now become ridiculous. As well as her two buckets of grain a day, he now takes her fruit and boiled eggs, which are hand fed to her. Because this routine is so entrenched, no visit can now occur without food, unless one wishes to be pursued relentlessly by a pig shoving her snout into your hands.

Every time I leave him in charge, one or more animal develops a new quirk. Last time it was the dogs believing they have a god-given right to sleep on the sofa. This time he has created a pig that demands titbits on every visit.

I got up at my normal time, ate my porridge then made my way to the front door, ready to leave at seven. As I opened the door, I was greeted with a Dickensian Christmas card scene. A light dusting of snow on the road, Christmas cake icing on the hedges and the sky alive with gentle flakes. I could barely control my excitement. Choice – public transport or bike – skidding out of control under a juggernaut or the long trek to a freezing cold station to wait for a train delayed by frozen points. I quickly made up my mind, shoved on my balaclava and cycle helmet, checked the tyres and set off.

For a few brief hours London was pretty. The snow sat on the branches of bare winter trees, the roar of traffic quietened, the pavements and roads clean and fresh. As I cycled across the canal, the banks were a carpet of brilliant white, the old tins, tyres and assorted city rubbish hidden from view. A flock of ducks were honking noisily, swimming in the icy water, enjoying this new experience. I arrived at school refreshed, energised and invigorated, marvelling at how a shower of snow can have such an impact on a grown man.

Panic stations on the farm as Eggs has given birth three weeks earlier than expected. It appears that her first insemination that we considered unsuccessful was in fact successful and the 12 little piglets she gave birth to this morning are the result.

The first Martyn knew of the arrival was when he took her food down this morning and she stayed in her house grunting contentedly. Further investigation saw her as contented as a pig with piglets, giving them all their first feed. The arrival is not ideal in terms of weather, as there was ice on the ground this morning. Martyn has rigged up a temporary creep with heat lamps for the little ones and hopes this keeps them warm enough. Eggs meanwhile, is being spoiled with a constant supply of fresh fruit and boiled eggs.

Here in the UK, the media is gunning for the home secretary, Blair has become despised, everyone talks of Celebrity Big Brother and people generally feel discontented with their lot. Political correctness (or perceived political correctness) still seems to be the order of the day. How much is true and how much is media created is hard to say, but it is interesting to note that everyone you speak to is unhappy with the way things are, but the status quo remains unchanged.

Living in Portugal, I feel we often underestimate the advantage of not speaking Portuguese fluently. To follow a conversation I have to make myself listen and concentrate. It’s very easy to ‘tune out’ of conversations and all the irritatations of day to day life. Returning to England has enabled me to see the value of the ability to opt out.