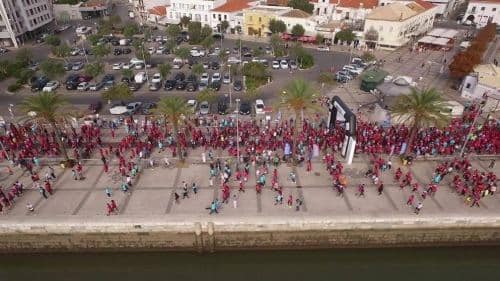 Members of the public are being asked for their views and opinions about the proposed redevelopment of Rua 25 de Abril in Quarteira.

Improving the quality of life for residents and visitors to the city is a priority for Loulé Câmara, who presented the plans at a meeting on February 3.

The project officially began in 2009 with a winning proposal by Sketch Log being chosen as the design for the road.

However, Loulé Mayor Seruca Emídio stated that there had been a need to “correct some issues” with the plan and these changes are now available for public consultation.

At the meeting, Seruca Emídio stressed the importance of the public being involved in the process, which will see one of the most recognisable streets in the city being changed.

He said that the project was a priority for Loulé Câmara and fended off criticism about the Câmara’s commitment to Quarteira.

“We are often accused of only doing urban regeneration in Loulé but we also want to make improvements in Quarteira. However, to do this we need the help of the residents,” said Seruca Emídio.

“We believe that this is a good proposal but we will not impose it on residents if they do not want it. Our intention is to create a high quality image for Quarteira and to improve the quality of life and safety of the residents. We want to make the best of Quarteira without harming the people who currently live there.”

An important issue which has been addressed in the proposal is the number of parking spaces available along the road.

It is expected that the new plan will see an increase from 153 currently to 186, with a pool of 40 parking spaces planned near the cemetery and another block of spaces to be located next to the Banif building.

Seruca Emídio referred back to changes made to the Praça da República in Loulé, which saw traders complaining to the Câmara about the possibility of a fall in trade because of the parking changes and reassured those at the meeting that changes can instead be positive for everyone.

He said: “The traders in Loulé said that the new system would reduce the amount of trade in the area. Today, however, everybody has agreed that the changes actually caused a substantial improvement for traders.”

José Coelho Mendes, the president of the Junta de Freguesia of Quarteira, said: “This work has been an ambition of the parish council for some years now as the road needs to be improved, and it is important for us to reclassify the area for the broader community.”

The proposals are available for members of the public to view at the Centro Autárquico de Quarteira until February 19 and all residents are free to leave their suggestions.

For further information about the project or about how to consult the plans, please call the parish council on 289 315 235
1″>news