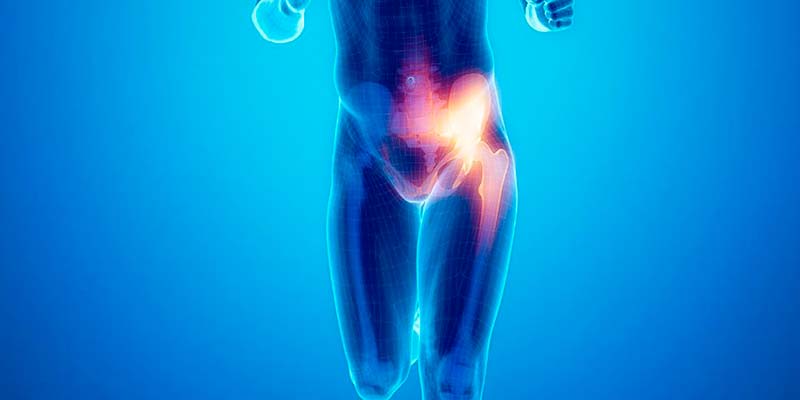 Pubalgia, also known as sports hernia, was first described in 1928 by the urologist Dr. Beer and is characterised as a localised pain in the pubic symphysis, with possible irradiation to nearby areas such as the groin area, perineum, hips and suprapubic zone.

Although it is more frequent in athletes (football, rugby and hockey players), it may also occur in patients with pelvic fractures, rheumatic diseases, bone oedema and inguinal hernias.

It is usually of multifactorial cause and is associated with an overload of exercises, muscular imbalances, reduced mobility of the hip or sacroiliac joints that lead to pain during contraction of the flexors and adductors of the hip as well as during contractions of the abdominal muscles when coughing or sneezing.

In the vast majority of cases, conservative treatment using physiotherapy and osteopathy can achieve effective results, since both will provide an evaluation that relates the musculoskeletal system to the visceral system, reaching the cause responsible for the painful symptoms resulting in pain relief while at the same time reducing functional disability.

On a musculoskeletal level, the pubis together with the ilium and the ischium form the iliac bone, which articulates with the sacrum, the lumbar spine and the femoral joint. If there is an imbalance of the muscular tensions between the trunk and the lower limbs, it can cause a mechanical tension, forcing the pubis to adapt, leading to an increased mobility, resulting in pain.

For example, in the case of an athlete who already has a history of ankle sprain or rupture of the posterior thigh muscles, there will be an alteration in the tension of the muscles of the lower limb, causing an unbalancing force to the pelvis, which during sports activities will create a hyper-mobility of the pubic area, originating in pubalgia.

On a visceral level, the pubis is closely related to the pelvic organs, especially the bladder, uterus and rectum, through the pubovesical ligament and sacro-utero-vesico-pubic ligament. The latter being hormone dependent, so during a woman’s menstrual cycle it suffers a density change altering the stress level on the pubic symphysis. This factor, coupled with the physical overload of female athletes’ sporting practice, will increase the likelihood of developing pubalgia.

In many cases of pubalgia, the real problem is not on the location of the pain, therefore, treating that zone will not produce the expected result, therefore symptoms persist. In these situations, physical therapy and osteopathy will evaluate the patient as a whole and will seek the origin of the lesion by performing a functional diagnosis, using a set of methods and manual techniques on the various structures of the body, developing a correct treatment plan which will be effective in the treatment of pubalgia.

André Lota is a physiotherapist and osteopath, and specialist in musculoskeletal injuries, working at the Hospital Particular in Alvor.