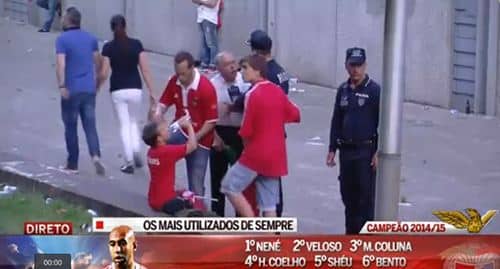 The PSP squad leader who shocked the nation last year after he was seen on live TV battering a father and grandfather in front of two horrified children outside a football stadium has had his punishment extended by a further 200 days’ suspension without pay. The “very tough punishment” (in the words of his legal representation) follows 180-days’ suspension on reduced pay which had just expired.

Filipe Silva, 30, now has a legal time limit in which he could lodge an appeal against the decision by the Ministry for Internal Administration, but it is not clear what his next move may be.

The case dates back to May when Silva approached 43-year-old father José Magalhães, his 70-year-old father and two young sons after they used a ‘prohibited’ exit from Gumarães football ground to escape the crowds.

Silva is understood to have been irritated that Magalhães had used an exit “closed to the public” and after what appeared to be a brief conversation, suddenly launched into an attack on him, beating him to the ground with his truncheon.