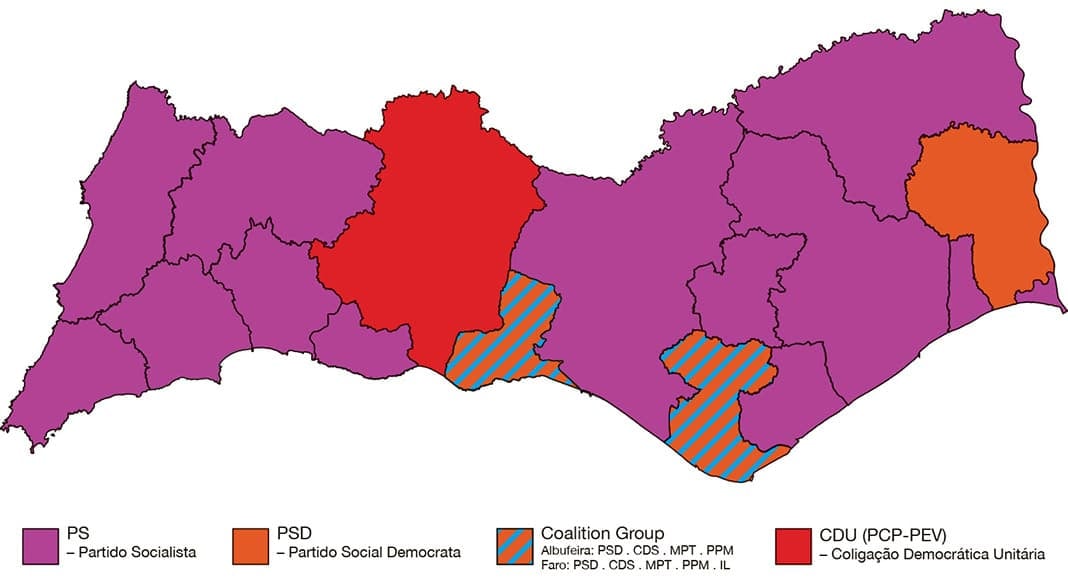 The Socialist Party (PS) has strengthened its hold on the Algarve, winning Sunday’s local elections in 12 out of 16 boroughs. The Socialists received over 40% of the Algarve’s total votes and have taken over two new local councils previously held by Social Democrats PSD – Monchique and Vila Real de Santo António. PSD now runs just one council on its own (Castro Marim) and two more as part of a coalition with other parties (Faro and Albufeira). Silves remains the only municipality in the Algarve won by the Communist coalition party (CDU).

The race was tight in several boroughs in the Algarve. Álvaro Araújo (PS) was one of the big winners of the night in the region, beating former mayor Luís Gomes in Vila Real de Santo António and taking over a council previously held by PSD. However, he won just over 37% of the votes, with the PSD getting 32% and CDU 11%, meaning he will have to run the local executive without a majority.

The same will happen in Vila do Bispo and Tavira, where Socialist mayors Rute Silva and Ana Paula Martins, respectively, celebrated very narrow victories.
PS won in Vila do Bispo with 33.07% of the votes, a few more than independent group ‘Somos Pelo Concelho Vila do Bispo’ (a citizens’ movement) which received 31.81%.

In Tavira, the Socialists won by the narrowest of margins with 43.71% of votes followed by PSD with 42.69%.

One of the biggest victories of the night came in Monchique, where PS regained control of the local council after 12 years of Rui André’s social democratic reign. Paulo Alves (PS) won by a landslide, receiving nearly half of the votes (49.61%), followed by PSD (21.5%) and CDS-PP (13.23%).

Rui André, who after completing his 12-year tenure as Monchique mayor ran for office in the neighbouring borough of Portimão, was unable to complete the predictably insurmountable task of beating socialist mayor Isilda Gomes, who received nearly 40% of the votes.

The 70-year-old politician will begin her third and last run as mayor of Portimão, a borough that has never known a mayor who did not belong to the Socialist PS party.

Rui André finished second, receiving 17.54% of the votes, while the independent movement led by former Portimão councillor Luís Carito (the borough’s former deputy mayor who was absolved last year of criminal charges relating to the controversial ‘Cidade do Cinema’ project which aimed to turn the town into something of a European Bollywood) received just over 13%. Extreme right-wing party CHEGA was one of the surprises of the night in Portimão, receiving 10.16% of the votes and succeeding in electing one out of the borough’s nine councillors.

In the western borough of Lagos, mayor Hugo Pereira (PS) trampled his opposition with 53.47% of votes and won his first election after taking power in 2019 when then-mayor Maria Joaquina de Matos stepped down to take up a position as MP. PSD collected just 12.9% of votes, while CDU received 9.1%.

Luís Encarnação (PS) also won his first election in Lagoa by beating Francisco Martins, the very man he replaced in 2018 when Martins stepped down due to “health reasons”. Encarnação received 51.46% of votes, more than Martins’s independent bid (18.01%) and PSD (12.17%).

Vítor Aleixo (PS) has also retained his title of mayor of Loulé, having convinced 55.41% of local voters. Runners-up include the coalition of PSD, CDS-PP, MPT and PPM which received over 22% of votes, and CHEGA, which received 8.72%.

Another indisputable victory for the socialists came in São Brás de Alportel, where Vítor Guerreiro emerged the clear victor (58.56%) with PSD being the only other party to elect councillors (29.75%).

Alcoutim will also remain a socialist borough, with Osvaldo Gonçalves returning as mayor with over 55% of votes while PSD received just over 37%.
Meanwhile, this election night was one to mostly forget for PSD in the Algarve.

Francisco Amaral is the only mayor who won in the Algarve backed solely by PSD, retaining his position with a clear victory in Castro Marim (56.18%) over PS (31.32%).

Rogério Bacalhau, backed by a coalition comprising PSD, CDS-PP, MPT, PPM and IL, won in Faro with 47.76% of votes ahead of PS (30.58%) and will begin his third and last term ahead of the local council.

On the other hand, José Carlos Rolo will also have a tough job ahead of him in Albufeira. Rolo, who was just recently released from hospital due to a pulmonary infection, won the local election with 32.04% of votes representing a coalition of PSD, CDS-PP, MPT and PPM.

In other words, the coalition missed out on a majority and will elect just the mayor and two councillors, while runners-up PS (25.67%) will elect two councillors and independent movements MIPA (led by former Albufeira mayor and Algarve tourism boss Desidério Silva, who received 15.99%) and AP (10.45%) will each elect one.

However, one of the biggest talking points about the local elections continues to be the alarmingly high abstention levels.

Political disengagement remains a serious issue in Portugal, and even more so in the Algarve.

TVI political commentator Sérgio Sousa Pinto said that the time has come to “question what is going on with our democracy.

“How is it possible that after just 40 scarce years of democracy we find ourselves in this situation where three to four million people do not go vote,” he said, highlighting the important role that local councils play in the lives of their citizens.

“If someone is not happy about their mayor or parish council president, why do they miss the opportunity to try to substitute them,” he questioned. 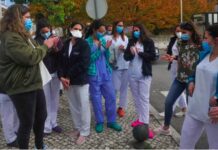 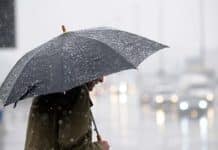