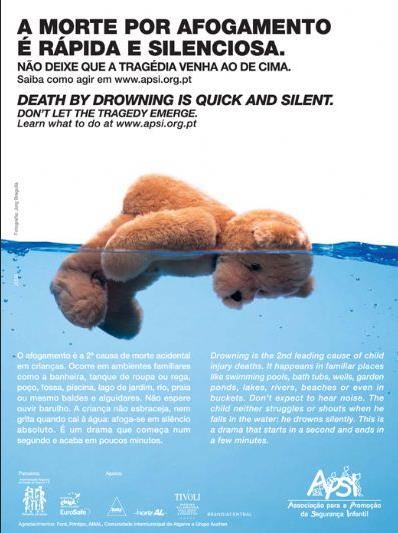 Twelve children died as a result of drowning between September 2007 and the same month in 2008, an increase over the previous year’s figures, according to a report released by APSI, the Portuguese Child Safety Association.

At a press conference held in Vilamoura at the Tivoli Marina Hotel on May 28, APSI representatives presented information on how to protect children from drowning and prevent unnecessary deaths.

A spokesman from APSI revealed that drowning is the second most common cause of child deaths, with child mortality caused by motor vehicle accidents being the first.

APSI addressed the issue of child drowning, the fast and silent killer, and looked at the reasons behind the high number of deaths in the country both at the beach and in private swimming pools, giving advice on how to best protect children from water related death or injury.

Five of the 12 child deaths by drowning reported last year occurred in private swimming pools in the Algarve, and the repetition of similar deaths could be avoided according to APSI if advice regarding pool fencing and vigilance is followed.

During the conference, two prototypes of fencing for swimming pools were demonstrated while a selection of life jackets and other life saving devices were also shown.

“The drowning of children is still a disturbing national reality,” said the APSI spokesman. “We need a comprehensive national and local plan to tackle the issue of child drowning, incorporating political figures, construction specialists, health officials, local Câmaras and tourism authorities.  Everybody needs to share the responsibility of this problem.”

Local swimming instructor Yvonne Fisher warned of the dangers facing the children of visitors to the Algarve, especially those who are not used to having their own private pool: “Parents need to be vigilant at all times, especially when they first arrive. I have heard of terrible stories of children drowning as their parents are unpacking the cases in a holiday villa.”

She added: “Always assess a pool, checking to see if it is fenced, where the shallow and the deep end are and removing any visible temptations in the pool, such as toys that children may attempt to reach for.”

Protect children this summer by making yourself and your children aware of the dangers posed by water, whether you are by the sea, near a swimming pool, a lake or even a well.

Actively supervise all young children, even if they are able to swim.

Teach your children how to swim and dive safely

Wear a personal floatation device when boating or fishing

Use pools that are fenced with locking gates

Teach children the rules of water safety: Never swim alone, never dive into unknown bodies of water, do not push, dunk or jump on others and know where to get help in case of an emergency.