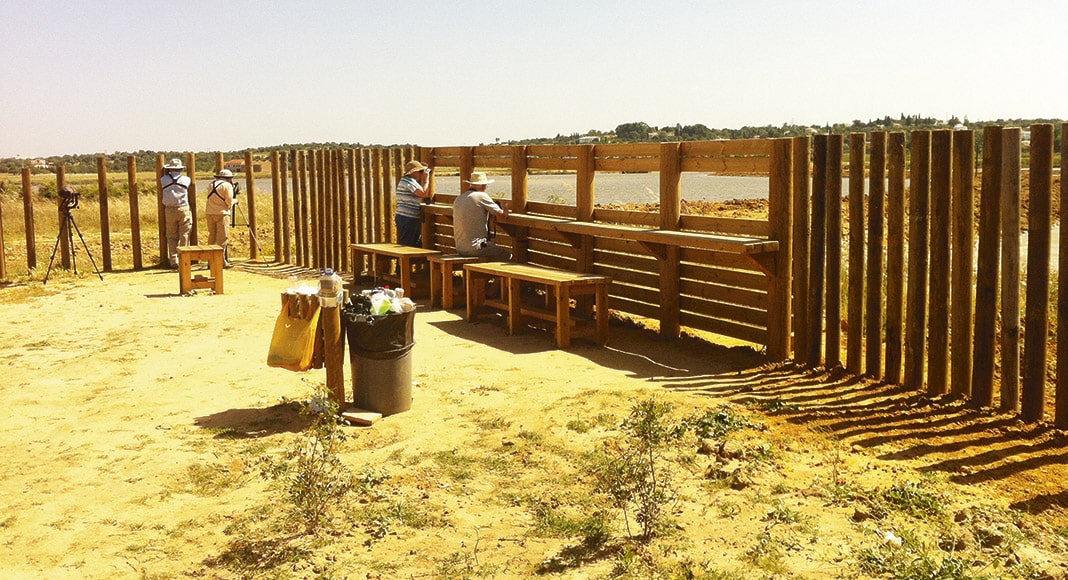 It is two years since Portugal’s largest environmental protest got underway in a bid to save Lagoa dos Salgados from the horrors of coastal development. So, what – if anything – has changed? The Resident takes a trip to the internationally-renowned birding wetland and finds both good and bad. We also learn of a little-known ‘secret’ up environmentalists’ sleeves which might – just might – put the kibosh on plans that would see the surrounding area concreted over for VIPs. It’s a rare snapdragon, so fragile you could step on it without knowing.

But first to “the good and bad” … Our guide for this revealing tour was birding enthusiast and nature holiday specialist Frank McClintock, a long-time resident whose commitment to “saving Salgados” has resulted in a petition that has already amassed over 32,000 signatures from bird lovers and nature enthusiasts the world over.

Crocodile Dundee look-alike McClintock is responsible for the beautiful photographs illustrating some of the “good” of the latest news coming out of Salgados.

“From a species point of view, the lagoon is looking terrific,” he told us when we met him in a sandy carpark alongside Salgados early one morning.

“Recent rehabilitation work (a joint collaboration between Águas do Algarve and APA, the Portuguese environmental agency) has increased the wealth here without any doubt. The other day, we saw three slender-billed gulls – a real rarity for the Algarve, and a species I’ve never noticed at Salgados before.

“As opposed to previous years where nests were frequently destroyed due to poor management of the area, we now have nesting Avocets, Collared Pratincoles, Black-winged Stilts, Little Grebe, Kentish Plover, Ringed Plover, Little Ringed Plover, Common Sandpiper, and Marsh Harrier, as well as many others.

“This is all testimony to the effectiveness of the work that has been carried out and the new habitats that have been created,” he stressed.

“The presence of species such as the Slender-bills, and also the Pectoral Sandpiper that was seen here yesterday, shows that the lagoon is recovering well from its recent trials, and with proper management I hope that this trend will continue.”

But – and there is always a ‘but’ with up-front McClintock – “there are some negative points that need to be addressed”.

“The facilities that the authorities have palmed us off with are an abortion,” he launches into his stride.

“No one in charge seems able to understand that this is a hugely important place that could earn Portugal mega bucks-worth of income if it was properly presented.
“Instead, they have produced a hide that must have been designed by a 16-year-old and cuts off access routes so that anyone with any serious birding equipment has to lug it across the equivalent of a ploughed field.

“If this is the level of interest and commitment that the authorities show towards a huge segment of their tourist income, there is no wonder that Portugal faces a hard struggle exiting from its recession,” McClintock adds.

“The bins haven’t been emptied for weeks – on the contrary, someone’s just added another one and the spillover from both is making the plants that were left to die unwatered look even less welcoming.

“We were here in the morning and couldn’t take much more than 20 minutes in the full sun. How can anyone, with a budget of what we were told was €200,000, think that this is acceptable?

As if on cue, a couple with binoculars and heavy walking shoes approach. We ask if they are bird watchers. Sue and Geoff Hill from Bristol announce that yes, they are.

What do they think of the new ‘hide’ that McClintock is trashing in no uncertain terms? It is a huge parched area, exposed to the elements and staked out by a series of wooden posts reminiscent of Custer’s Last Stand.

“This isn’t a hide, surely,” Sue scans the location with furrowed brow. “It looks like nothing I have ever seen…”

A little later a young family turn up with a baby and start walking along the ‘observation shelf’. As McClintock informs them “this is meant to be a bird hide, so it is probably best not to walk on top of it”, the father says: “Oh, sorry… we had no idea.” Point made.

A call later to Águas do Algarve, whose signs proclaim their million euro investment in the lagoon’s rehabilitation, elicits no useful answer.

“We were not responsible for the design of the hide,” said a spokesperson. “You will have to talk to APA,” the Portuguese environment agency which has since expertly dodged all our attempts at contact.

Meantime, the ‘downright ugly’ looms… a new slant on the shenanigans ongoing behind the plan to transform a 359-hectare site alongside the lagoon into a form of upmarket Albufeira.

Last year’s Environmental Impact Assessment – commissioned by the developers, and only relating to a small section of the area – made no mention of the largest colony known throughout the world of a species in danger of extinction.

Linaria Algarviana is listed on Annex II of the Habitats Directive and under Appendix I of the Convention on the Conservation of European Wildlife and Natural Habitats (Bern Convention).

According to the IUCN (International Union for Conservation of Nature) Red List of threatened species, “it is legally protected in Portugal. Appropriate site management for this species including traditional grazing activities or control of urban and tourism expansion should be established.”

As far as the Resident can establish, environmentalist groups fighting development plans around Lagoa dos Salgados already know everything there is to know about the existence of Linaria Algarviana on the site, and they are poised to battle the issue out in court if necessary.

Meantime, developers Finalgarve told us some weeks ago that they are “right where we want to be, disclosing the information that we believe is the most appropriate for the project’s good development”.

Spokesperson João Queiroz refused to be drawn on whether the group – a subsidiary of the Galilei organisation that emerged from the ashes of disgraced BPN – had found the multi-million euro finance it needed to start the controversial development. Certainly, there has been no hint that it has, and we are now well into the year when they maintained they would start laying infrastructures.

In other words, as the Black-winged Stilts and Avocets wade happily in the renewed splendour of Lagoa dos Salgados, the future of this natural paradise still hangs very much in the balance.

For anyone keen to add their signature to the petition “Save Salgados”, visit: https://secure.avaaz.org/en/petition/Save_Salgados_a_unique_internationally_recognized_birding_sanctuary_from_being_destroyed