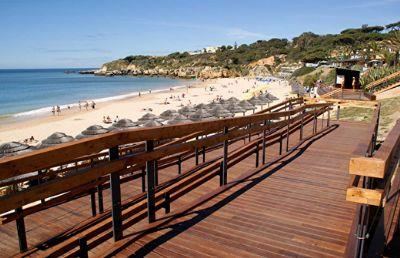 Visitors to Praia da Oura beach in Albufeira will now be able to enjoy improved access thanks to an investment of more than 300,000 euros by private tourism group Borda D’Água.

Eduardo Vieira, one of the managing partners of the group, told the Algarve Resident: “The new ramp to the beach that we have built has made the beach more accessible for the disabled and also for families with small children. We have also improved the terrace facing the sea which has made for a far more enjoyable visual impact.”

The improved access was unveiled on May 8 and was part of a further development programme by the tourism group which included the remodelling of the beach front restaurant.

“We were thinking about these improvement works for some time and, although this may not appear to be the right time to make an investment of this extent, we decided to go ahead.

“We believe that the most appropriate way to address the current economic situation is to bet on quality. With this requalification, we can offer tourists a much better product which, combined with a policy of reasonable prices, is certainly going to have its return in the near future,” said Eduardo Vieira.

The architect for the entire development project at Praia da Oura, Miguel Vieira, said: “Our aim has always been to make the most of the sea views, the unique feature of buildings in this area. When it became clear that we would be able to restore the beach access, we immediately looked at what else we could do to improve the other facilities, such as the restaurant, turning this now into a huge project.”

The cooperation of local authorities in allowing the beach front regeneration was praised by Eduardo Vieira who described the involvement of Albufeira Câmara, in conjunction with environmental and maritime agencies, as “excellent”.

Present at the inauguration of the access ramp was Albufeira Câmara President, Desidério Silva and President of the Municipal Assembly of Albufeira, Carlos Silva de Sousa.

Desidério Silva said at the presentation: “This project is a perfect example of the strong commitment that the municipality has shown towards creating conditions necessary to stimulate private investors into backing high quality projects in the Albufeira area.”