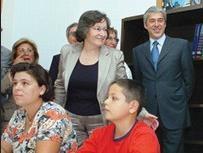 PRIME Minister, José Sócrates, was in the Algarve on Tuesday to open a new primary school and kindergarten in Conceição, Faro.

Also present at the inauguration were the Secretary of State for Education, Valter Lemos and the president of Faro Câmara, José Apolinário.

The Minister for Education, Lurdes Rodrigues, visited the Neves Júnior primary school in Faro’s city centre and the Pinheiro e Rosa sixth form college, located in the Penha area on the same afternoon. Their visits marked the official start of the new school year in Portugal and appeared to some to represent somewhat of a PR exercise as many other schools around the country have not opened on time, causing great anger among parents, reports The Resident’s Caroline Cunha.

The new school and kindergarten opened by Sócrates in Conceição represents a total investment of 972,000 euros and boasts the capacity for 75 children aged three to five in

the kindergarten section, as well as 175 places for primary school children.

With the inauguration of this new school in Conceição and the opening, this month, of a new primary school and kindergarten in Montenegro, another large investment (1.1 million euros), the borough of Faro can now offer double the existing number of places for pre-school children in state education (250, against 125 previously).

Overall, taking into consideration, state, private and co-operative educational establishments for children aged from three to five, the borough offers a total of 1,491 pre-school places.

In addition to these investments, Faro Câmara is making improvements at three existing primary schools located in Santa Bárbara de Nêxe, Vale Carneiros and central Faro respectively. In addition, the primary school in São Luis is due to be extended and a new crèche and kindergarten built in Penha.

On the first day of the new school year, Monday of this week, lessons only began at less than 2,000 of the country’s 12,000 state schools. Parent associations are accusing the teachers of delaying the start of lessons for their own interests and are calling for tighter control by the government.

Data, supplied by the Ministry for Education, reveals that lessons only began in 15 per cent of the country’s schools on the first day of the new term. The situation has drawn strong criticism from the Confederação Nacional das Associações de Pais (Confap), the national confederation of parent associations that describe it as being abnormal and unjustifiable.

Meanwhile, Lisbon took the dubious honour of being top of the list for absenteeism, with only 64 schools opening to students on Monday.

In the south of the country, only 10 per cent of schools in the Alentejo opened on time (130) and only a quarter of the Algarve’s schools (86) were open to pupils.

However, by today, Friday, September 15, all schools must be open.

Fernando Gomes, head of Confap commented that is deplorable that few teachers start lessons at the start of the new school year.

“The great majority of schools are only receiving students at the end of the week. There is no justifiable reason for this,” he says. Gomes accuses the teachers of delaying lessons until the absolute limit and points out the fact that children are then off school for up to an extra week, which not only means they are missing out on lessons, but also, the situation can cause problems for working parents who need to arrange child care, not to mention the associated expense of such arrangements.

However, for the teachers’ union, Fenprof, lessons starting gradually throughout the country is not alarming at all.

Paulo Sucena of Fenprof states, “Choosing the final day of the deadline period stipulated by law (today, Friday) is related to issues such as the placement of teachers and the organisation of the academic year, in terms of timetables”. Mário Nogueira, of the union’s office in central Portugal states that the majority of teachers started work on September 4, for the commencement of meetings.