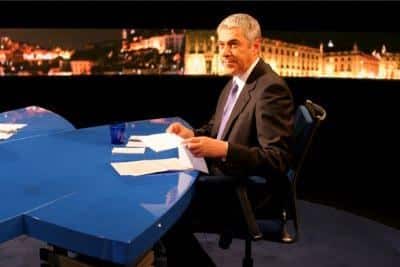 Prime Minister José Sócrates almost lost his temper during an hour-long interview last week in which he was grilled about his involvement in the Freeport Case.

Questioned by RTP’s Judite de Sousa and José Alberto Carvalho in the Grande Entrevista, Big Interview, José Sócrates angrily snapped that he had “tried to distance himself as far as possible” on the question, but that he could not “stand back and say nothing to an attempted political assassination attack”.

At various times he reiterated his confidence in the investigation process and justice, “not just to reach a conclusion over corruption allegations but, at the same time, to identify and punish those who have sought to use my good name to obtain some kind of advantage,” he said.

“I feel like some kind of victim in a Kafka-like legal process,” he blasted, adding that he “doubted” the Freeport Case would cost him an absolute majority at the forthcoming general election later this year.

When asked about the Charles Smith DVD handed to television station TVI, in which Charles Smith allegedly claims José Sócrates to be “corrupt”,  a claim Smith later denied, the Prime Minister almost lost his temper.

“I should have known that we’d come to this. Judite de Sousa (the interviewer) was dying to repeat what had been said there,” he said.

He said that he had already presented formal complaints against former Smith & Pedro partner Charles Smith, who is a suspect in the Freeport corruption case. The Prime Minister also became visibly hot under the collar when asked about legal complaints that he had made against nine journalists.

“Excuse me! I have not opened up legal proceedings against journalists but against people who have insulted me,” he blasted.

Firing on all cylinders against TVI, he said: “Didn’t you see the news on Friday? That was a man hunt, a news report used as a personal attack motivated by hate,” he slammed.

On other questions, he admitted that he held differences of opinion with President Cavaco Silva but denied that the President was being used in “electoral fights”.

“If the opposition thinks they can use the President of the Republic as a party political instrument against the government then they should think again,” he said, adding that in politics “each peddles his own bicycle”.

The Prime Minister accepted the country was suffering from economic recession but said that the government had a plan to deal with it by widening unemployment benefits to an extra 15,000 people and creating employment in 2009 through the TGV project.

José Sócrates once again affirmed that the crisis affecting Portugal was “an international one” and that there were “many countries worse off than us”.