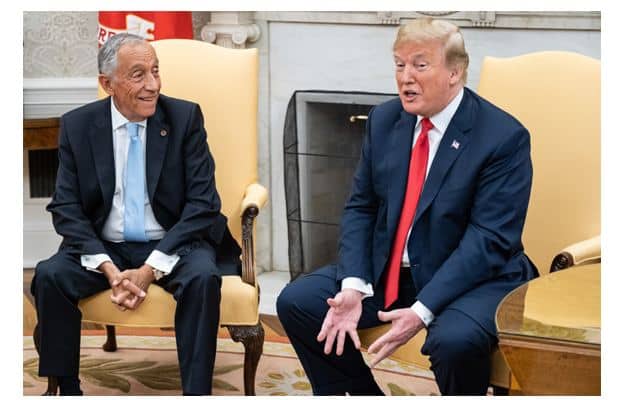 He took the opportunity to “praise the Portuguese response” says a note on the official site of the Portuguese presidency, and “offer all help that may be considered useful and necessary”.

Handling what has become the world’s worst outbreak of the new coronavirus – both in terms of cases (over one million) and deaths (approaching 64,000), Mr Trump appears to have called over matters “of an economic nature and the international situation”.

Says the presidential portal: “The two presidents shared the evolution of the Covid-19 pandemic, the way each of the countries have faced the illness and its propagation”.

One subject referred to was “the participation of a Portuguese company in the scientific tests in the U.S. for the production of a specific medication”.

All in all it was a fairly inscrutable announcement – leaving major questions on which Portuguese company is involved in producing a specific medication. Could this have anything to do with the theory put forward by scientists in Australia last month that an antiparasitic drug called Ivermectin, produced in Portugal by Hovione, could kill the new coronavirus in 24 hours? This finding, via in-vitro tests has not apparently been borne out in subsequent clinical trials – but Hovione does have offices throughout the world, including one in New Jersey.

As to Marcelo underlining ‘the importance of the multilateral framework of international organisations to confront common challenges’, could this have meant Portugal’s head of state urged Mr Trump to reconsider his position with regard to the World Health Organisation – from which he suddenly withdrew US funding last month?

We may never know. All we are told is that both men exchanged mutual wishes “for the greatest successes of two friendly nations in overcoming the current situation”.

A peek into President Trump’s Twitter account gives no clues, and shows the U.S. president is still busy decrying fake news and labeling news stations in his country as “Chinese puppets”.

According to the president, his administration has “done a great job on testing, just like we have on ventilators and everything else”. To be fair, the US record for testing is better than some countries – but remains way behind even Portugal which has performed 38,814 tests per million of population compared to America’s 19,385.