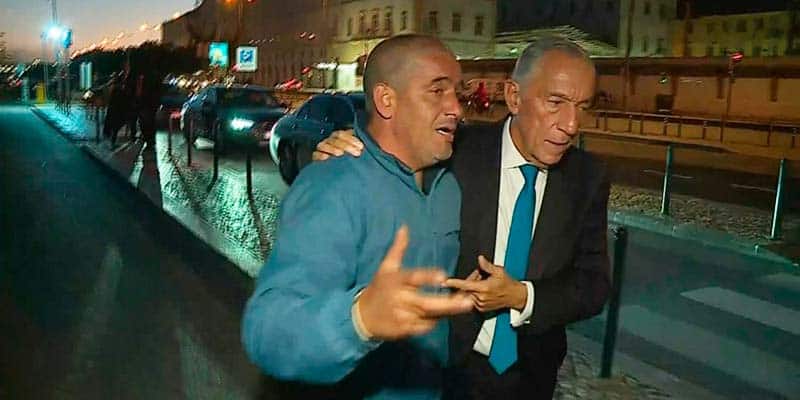 President Marcelo made a special trip yesterday to the spot where a newborn baby was discovered abandoned in a recycling bin (click here) to personally thank the child’s rescuer, 44-year-old homeless man Manuel Xavier.

And as is his style, he quizzed Xavier on his history. What had caused him to become homeless?

The answer, as tragic as it is, saw the president “guarantee that he would help him”, say reports.

Thus out of raw misery, came a bit of magic: the abandoned baby – certainly hours if not minutes from death when he was found – is currently ‘stable and healthy’ and being cared for in the intensive care facility of Alfredo da Costa Maternity Hospital, and Manuel Xavier will now almost certainly get the MRI he has been waiting months for so that he can have the surgery he needs and return to the level of fitness required to find new employment.

Says tabloid Correio da Manhã – which exclusively covered the meeting between the President and Manuel Xavier yesterday afternoon – Marcelo was effusive in his praise, embracing the homeless man repeatedly and calling him ‘our hero’.

Indeed, he said Xavier was “an example of humanity… A jewel of a man”.

As reports explained earlier this week, Xavier wasn’t sure when he heard the baby’s cries where they were coming from. He thought perhaps they were the mews of a kitten. He could so easily have passed on, but he didn’t. And for that Marcelo said he wanted “to thank him because what he did has no price. It came from the heart”.

The story of how anyone could have abandoned a newborn baby stark-naked in a bin into which people habitually toss discarded metal and plastics without looking has shocked the nation.

Authorities are continuing their trawl through CCTV camera images to try and find whoever was responsible (see update below).

President Marcelo’s commitment to the homeless meantime continues. This week he quizzed the government on what its new four-year term has in store for the homeless, as the biting cold of winter approaches.

“This is the moment the new government must decide whether or not it is going forwards with the work started by the last government”, he said. “Right now there are new problems, new challenges, new situations”.

It was a challenge that hasn’t been answered in so many words but one the president is clearly not going to let go.

As to the new problems and challenges, these include associations (that help the homeless) in danger of losing their headquarters, “one of them in Lisbon”, and the need to maintain “direction, speed and means” of efforts to improve the lives of those whose home right now is the street.

Police have identified the mother of the baby: a young homeless woman of 22 years old, nationality not-specified.

A source for PJ detectives say they found evidence to show that she had had the baby ‘on the street’.

Said the source: “She is a person who lives in precarious conditions in the public highway”.

Publicising the woman’s nationality would not be ‘relevant’, said the source.

Police are confident the young woman “is the only author of the crime” as the father of the baby “is not in the city, or even in the region”.

The young woman, held in preventive custody, was presented before a magistrate for ‘the first round of judicial questions’ on Friday.

Her baby meantime is expected to be released from hospital and into the care of social services within the next 48-hours.