Portugal Resident
Home Portugal News President does his bit for Portugal, naked from waist up 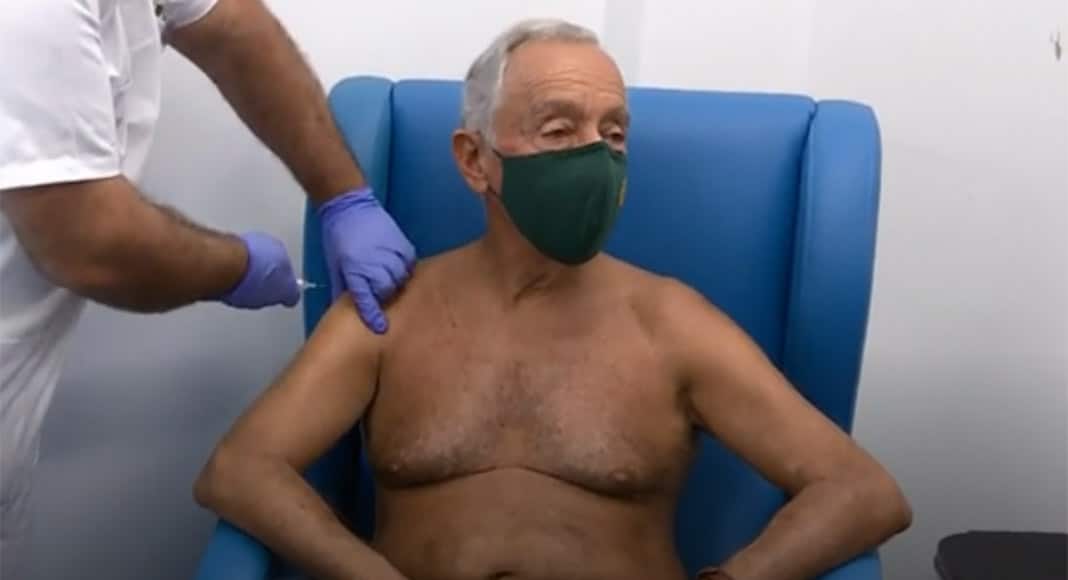 In a strange exhibition of flesh this morning President Marcelo did a lot more than roll up his sleeves to try and encourage fellow citizens to get their annual flu vaccine. He took off everything from the waist up.

Carefully looking away from the point of needle puncture, the head of state was photographed by the nation’s press, giving a rallying message: “We are all in the same boat”.

The plan was to hear everyone on where the country is going (and how it should get there), in terms of the developing pandemic.

First to be heard today was health minister Marta Temido. There will be many others, said Marcelo, citing “representatives of the professional classes, economy and society. They all have to be heard…” and by Marcelo himself.

As the energetic head of state explained, it is important to hear everyone. In fact, “the more the better, because obviously there are consequences in life and health, as well as in employment, earnings, and people’s everyday lives”.

This is yet another sign that the relatively ‘frightening’ official narrative of last week is being gently toned down.

Prime minister António Costa has been on the television over the weekend, saying of course he didn’t mean for police to start checking people’s handbags to see if mobile phones had the government’s contact-tracing app installed (click here) – and today DGS health chiefs were playing down fears of a State of Emergency programmed to follow the State of Calamity in November.

Said under secretary of state for health António Lacerda Sales (like Graça Freitas, one of the figureheads at DGS press conferences) “we are not at this phase”.
The evolution of the virus in Portugal has to be “very well pondered and evaluated before technical decisions like that are taken”, he said, stressing “we are not going to anticipate scenarios”.

As to Marcelo’s encouragement to the country to take advantage of this winter’s flu vaccine, the idea is to safeguard as much of the population as possible, to avoid a ‘run’ on the SNS health service.