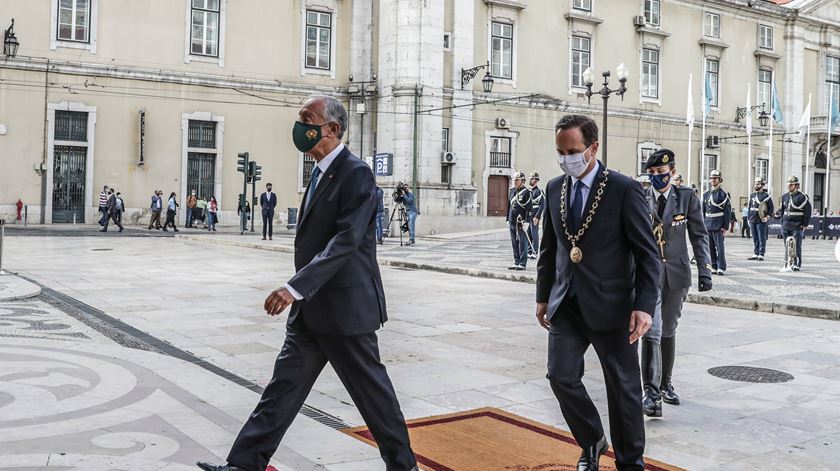 President Marcelo Rebelo de Sousa marked the 110th anniversary of the Implantation of the Republic with a sombre speech in Lisbon, talking about the most “difficult and demanding” October 5 commemorations in the history of Portugal’s 46 years of democracy.

“We do not want any more dictatorships”, he stressed in this year in which democracy has truly been put to the test.

There has to be “balance between the protection of life and health and the economy, without dramatising too much or too little”.

As often seems to happen with the president’s speeches, he messaged on multiple levels.

“What this October 5 tells us is that we have to continue to resist, to prevent, to care, to innovate, to act in freedom, to know how to make diversity compatible with convergence in the essential, to superimpose collective interests over personal interests…”

It is no coincidence that Portugal has just suffered “the worst weekend” in terms of numbers since the start of the pandemic.

Tabloid Correio da Manhã carried a double-page spread today on the fact that ‘hospitals are at breaking point’ (says the General Medical Council) with more people suddenly needing in-patient care, and the death toll rising in spite of the constant mantra from the prime minister that ‘Portugal cannot afford another national lockdown’.

President Marcelo appears to have been saying: “we need to get our priorities right”.

Diversity in terms of how people believe we should be reacting as a country is “democratic. And as such respectable”.

Coming a little more than a week before PS power makers have to settle the 2021 State Budget (with the help of left-wing ‘allies’), the President’s speech referred also to the “importance of cultivating the republican ethic”, meaning, he stressed, the “placing public interest ahead of any private, partisan or individual interests”.

It was very clear by the end of the 12-minutes that this president is watching the government like a hawk (as he always said he would). But where this actually leaves us is unclear. As Marcelo explained, “no-one knows when there will be a treatment and a vaccine for Covid-19” and after all the different ‘States of Emergency, Calamity, Alert and now Contingency we’re still in a state of ‘social and economic exception’ not to mention ‘sanitary crisis’.

The words were all the more sombre when one learnt that last Thursday’s Council of Ministers was attended by counselor António Lobo Xavier who has since tested positive for Covid-19. This means that everyone present at the meeting – including Marcelo, prime minister António Costa and even President of the European Commission Ursula Von der Leyen – has had to be tested and will face re-testing in the coming days. Indeed Ms Von der Leyen and the team that travelled to Portugal with her have gone into voluntary isolation, despite testing negative, for the required period in Belgium for these circumstances (which is seven days).