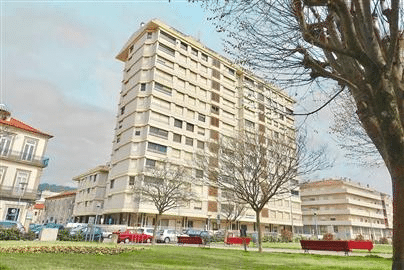 News flash this Friday afternoon is that the battling pensioners of Prédio Coutinho will now get their day in court.

Judges at the Central Administrative Court of the North have annulled the demolition order on homes they purchased legally many years ago – and the whole case has to be reheard.

This is a struggle that has been causing heartache and pain for over 20 years.

Prédio Coutinho (the correct name is Edifício Jardim) was ‘condemned’ for being ‘visual pollution’ during the government of António Guterres (now secretary-general of the United Nations).

The then minister for the environment José Sócrates – later to become the first prime minister to be held in jail on suspicions of corruption – labelled it ‘a cancer’ and ‘architectonic abortion’.

The 13-storey block was to be torn down and in its place would rise a smart new municipal market.

Prédio Coutinho’s 300 horrified residents were given no say in the matter. They were simply expected to accept the compensation offered, and quietly take their lives elsewhere.

But a ‘dogged dozen’ refused, and of those nine still remain.

These are people who have endured wreckers moving in on the building and starting demolition work as they tried to live in their homes (click here).

These are people whose water, gas and electricity supplies have been cut off; people who had to winch up supplies of food and water because they were (illegally) locked in to their apartment building by Viana do Castelo authorities.

Now, with the help of their lawyer, these people are getting what may be a final crack at justice.

Says Jornal Económico, the judicial battle “leaves a number of questions open, such as the Declaration of Public Utility (DUP) of the building”.

It was with this statement that the ‘Viana-Polis’ State entity “justified the (building’s) expropriation and demolition”.

As a page on Wikipedia explains, this is a story that has ‘run rivers of ink’.

Way back in 1975 there was a council plan to demolish the building. After that failed, there was a plan in the 90s to ‘lop off the upper seven storeys’. That also bit the dust. Then came years of acrimony and avowals by the council that ‘Prédio Coutinho’ was coming down, come what may. And still the homeowners – at least one of which was a soldier in the Colonial War – stood their ground.

For now, there has been no official comment from these battling stalwarts, though their lawyer Magalhães Sant’Ana calls today’s news “a victory”.

“We’re going back to the point we were at in 2005”, he told reporters. “Fifteen years later, the DUP is being re-appreciated to see whether it was legal or not. And it’s not just the DUP, it’s the very town plan for the historic centre and even the constitution of Viana Polis”.

Polis entities have been behind numerous ‘demolitions’ throughout the country. The word Polis stands for programmes of urban requalification and environmental valorisation (click here).

As we wrote this text, Viana Polis let it be known that the ‘victory’ in no way detacts from its firm intention to press forwards with its final objective… to demolish Prédio Coutinho, come what may (click here).

The entity whose sole purpose now is to demolish the building said it is awaiting a decision on an injunction filed last July, in order to proceed “with the conclusion of the social objective which is the demolition of Edifíco Jardim”.