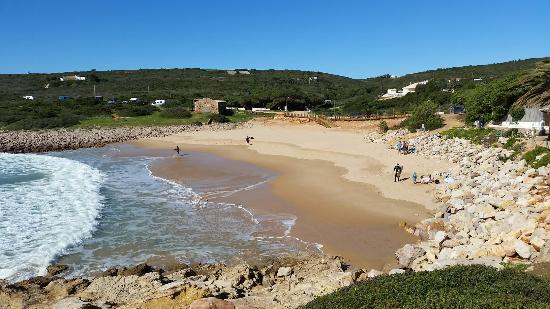 The tiny community around west algarve beach Ingrina is hoping the reign of terror that descended last Saturday – and continued through the week – is finally over (see update below).

National tabloid Correio da Manhã reports today that the son of Portuguese businessman and former president of Sporting football club Sousa Cintra is at last being held in preventive custody after three arrests in the last few days, two for apparently indiscriminate shooting in the direction of people working on land nearby, and one for the attempted burning down of a house and pine trees.

On Tuesday, beachgoers enjoying the last days of summer sunshine had to be evacuated from the tiny beach as Miguel Sousa Cintra fired off shots from a hunting rifle.

A similar incident three days before had seen the intervention of GNR police, but the 51-year-old was not held on any charges, and was home within a matter of hours.

Tuesday’s repeat performance saw newspapers for the first time involved, as police were faced with a slightly different situation. Using loudspeakers, they had to persuade Miguel Sousa Cintra to give himself up after he had apparently ‘barricaded himself’ into his beachside mansion.

As the delicate operation played out, beachgoers were stuck in a huddle, unable to return to their cars till the incident was deemed to have been brought to a satisfactory close.

Said sources, “the next day, you can imagine: the beach was empty. Who wants to come to a beach where gunshots are ringing out?”

Again, Miguel Sousa Cintra was ‘allowed back home’ – though this time the veritable arsenal of guns discovered at his home had been removed and held by police.

In both the shooting incidents, Miguel Sousa Cintra was found to have been ‘well over the limit’ for alcohol.

Then, late on Wednesday night, “hours after being released by a judge” over the second bout of shooting, Miguel Sousa Cintra appears to have attempted to set light to his neighbour’s house as well as a nearby pine copse.

Says CM, ‘the people inside the house were terrified’.

Said José Franco: “We woke up to a flash of light and when we went to the window we saw someone smoking and throwing a can of petrol. I banged on the window for him to go away and he threw a second can at the window”.

Said Franco, described as living in the house with his mother, “it was like a horror film”.

CM says there was even a third canister of petrol and a rag ‘wet with petrol’ which Miguel Sousa Cintra “did not manage to set light to”.

In the confusion, José Franco managed to put out the fire that had started “and ensure the flames didn’t reach the pine trees”.

By this time, Miguel Sousa Cintra had ‘fled to his house’ where CM suggests he started a bonfire.

Fortunately, ‘within moments’ GNR police were back on the scene – and despite Miguel Sousa Cintra having a kitchen knife in his hand and being clearly inebriated, he was persuaded to accompany agents back to the local police station and put in preventive custody.

Says CM, “the family are calling for compulsive internment”.

“I am very sad”, his famous father told the paper. “He is my son. He needs help. He needs a lot of help…”

But locals are still wary that this is an end to the horrors. “You just never know”, said one. “He keeps being allowed back home. We’re all living on tenterhooks …”

Correio da Manhã reports Miguel Sousa Cintra has been transported to Olhão jail en-route for Silves prison where he is due to get a medical evaluation to determine whether he should be interned for treatment for alcohol dependency.

For the time being at least, he will not be returning to the house overlooking Praia da Ingrina.