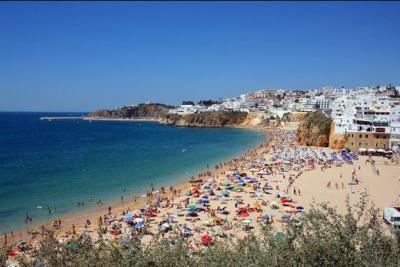 August is here along with the thousands of holidaymakers who find their way to the Algarve each year. But with IVA hikes, tolls, a congested EN125 and the ever present Euro crisis, what are the prospects of success for the Algarve during the busiest holiday month? The Algarve Resident spoke with Elidérico Viegas, president of the Algarve Hotels and Resorts Association (AHETA), and learnt that against all odds, the region was set for success.

This month is expected to see the return, in full force, of British, German, Dutch and Irish holidaymakers to the Algarve, despite a decrease in the national and Spanish markets, said the Algarve hotels association chief.

Elidérico Viegas said August continued to be the region’s most popular summer holiday month, with occupancy levels – “at around 100%” – similar to last year’s, despite  all the adversities the region has been subjected to.

“Portuguese holidaymakers have always represented the main tourist market in the Algarve in August and this year will be no different, even if numbers are down by 11%,” he said.

Visitor numbers from external tourist markets, particularly the British, have increased significantly, but holiday budgets have been trimmed substantially – “something which has been felt by most tourist businesses which have been recording lower business volumes,” said the president of AHETA.

“Holidaymakers, particularly families, are now taking advantage of the reduced prices and all-inclusive holiday packages being offered by hotel units in the region. The only way to stay in business at the moment is to adjust to current realities,” said Elidérico Viegas.

Questioned about the apparent ongoing investment in the hotel and restaurant sectors, with projects such as the new Conrad Algarve (turn to page 18) and new restaurants inaugurating regularly, Elidérico Viegas was keen to point out that the balance between businesses opening and closing down was “widely negative”, a reflection of the current economic crisis.

Sailing against the tide

Although the Algarve continues to enjoy high visitor numbers during the summer, much more could be done to support the tourism industry.

Slamming non-existent tourist promotion mechanisms, Elidérico Viegas said the days of the Algarve Tourism Board, whose intervention capacity is minimal, are numbered.

“Turismo do Algarve should be the main tourism coordinator, promoting the destination internally and externally, as well as be responsible for carrying out inspections within the sector and assessing and approving tourist projects,” he said.

“Without funding or power to fulfil its mission, Turismo do Algarve is a make-believe institution, despite the best intentions of some of its employees.”

Following an official visit to the Algarve in May by the Secretary of State for Tourism, Cecília Meireles (see Algarve Resident May 18 issue), little was offered as far as tourism development was concerned. When asked for his views of this, the AHETA chief confirmed that successive governments – this current one included – have failed to understand the true dimension and impact of tourism in the country. “The government’s inability to pursue external investment is a clear example of this,” he said.

Frustrated about this lack of vision, Elidérico Viegas believes the government has become “a prisoner of severe austerity policies” and is failing to implement wealth-generating strategies that lead to economic growth – tourism is pivotal in this exercise.

The AHETA president said: “if you want to improve a destination’s competitiveness, you don’t increase IVA in its main tourist industries – golf and restaurants. The vision of our politicians has been blurred by excessive impositions by Troika.”

Tourism in the Algarve appears to go with the flow of austerity. However, a segment that seems to be unaffected by the crisis is the luxury market.

The Algarve Resident has been receiving positive news from hoteliers in the luxury hotel market segment. Amongst them Vila Vita Parc Hotel which is having one of its best years ever.

“August is always a good month,” said General Manager Kurt Gillig, “But July is usually the strongest month for us. However this year, as well as July performing as positively as ever, we have much better advance bookings for August,” he said. The first half of the year was also very positive for Vila Vita Parc (pictured).
1″>news