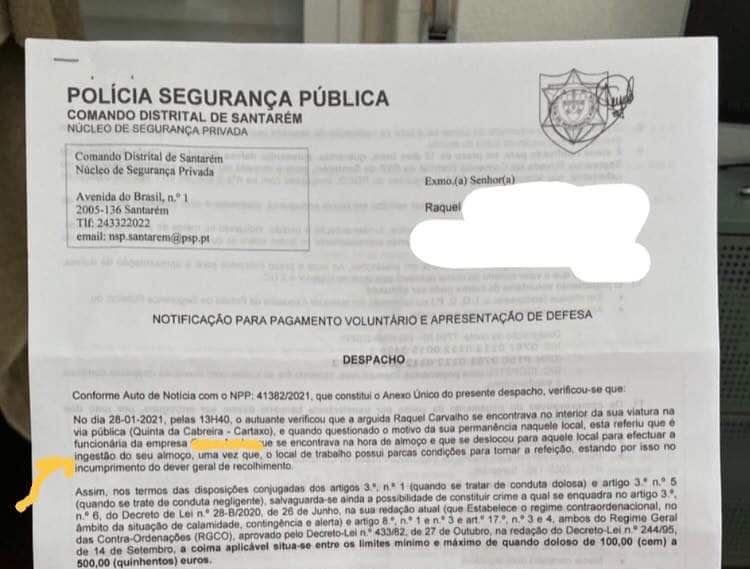 The zeal with which Portuguese police have been adhering to State of Emergency regulations has seen a young woman with what seems like a perfectly valid excuse fined €200 for consuming her lunch (a flask of soup) in her own car.

Raquel Carvalho, 27, was not in the least bit impressed with her fine which she received back in January.

She didn’t pay up on the spot, and she says she fully intends to contest the written summons she has now received.

She was, as she explains, trying to enjoy her lunch-hour, a little distance from her workplace, in what she viewed as an isolated spot “a car park, where there was no-one at all”.

The young designer revealed that she suffers from a ‘serious condition’ which puts her in a risk category for complications if she contracts Covid-19.

Raquel is employed by a company that has not conceded to her request to be able to  ‘remote work from home’.

Say reports, it is a furniture retailer in Cartaxo.

Thus, as was her routine during the toughest period of lockdown, she was sitting in her car one lunchtime when two PSP officers approached to inform her that she was “infringing the law obliging her to stay at home”.

The young woman presented her ‘declaration of work’ (showing that she was not able to remote work from home), to be told that this was only valid if she was ‘in circulation’. The fact that she was stationery rendered the document superfluous, said the agents. And she ‘had no right to be eating in the car’.

As the young woman told reporters: “If I had been able to remote work, this would never have happened…”

Her employers have offered her a place to eat lunch in isolation from other colleagues, but as it was ‘just a desk between the dining room and a bathroom’, she opted for the relative comfort and seclusion of her own car.

She admitted: “life has not been easy because of this illness” (but hasn’t revealed what the illness is).

Indeed, Raquel does not even appear to blame the police. They were acting on an ‘anonymous tip-off’ apparently.

The case however has ripped through national media, attracting a ‘polygraph’ test report (as it appeared so insane as to be fictitious).

‘Poligrafo.sapo.com’ however confirms that the story is genuine. It has even managed to get a ‘response’ from the PSP hierarchy, which translates as follows:

“As has been stated in the past States of Emergency and continues to apply all citizens must permanently observe the duty of retreat within the home. There are legally-consecrated exceptions to this duty which mean to guarantee a minimum level of quality of life, nonetheless they do not justify the failure to observe said duty. Thus the permission to travel (for the practice of sport, or to walk one’s pet etc.) should occur in the vicinity of one’s home, and travel to work should serve this purpose”.

“In this particular case, the citizen explained she wanted to lunch inside her vehicle. This is the reason for her having left her workplace. What could not have happened was for the citizen to have driven specifically in her car to another place which she considered more adequate for this purpose… even if she wanted to stay within her car, she should have done so in the workplace car park or at home”.

Very little of this statement appears to make sense. Raquel insists the car park she was in was very close to her place of work, and that she had just wanted somewhere where she could ‘relax’ a bit.

“I am not paying, even though they have told me I must”, she says. “I am going to see what I can do because I don’t think it is even possible for me to pay this (fine)…”