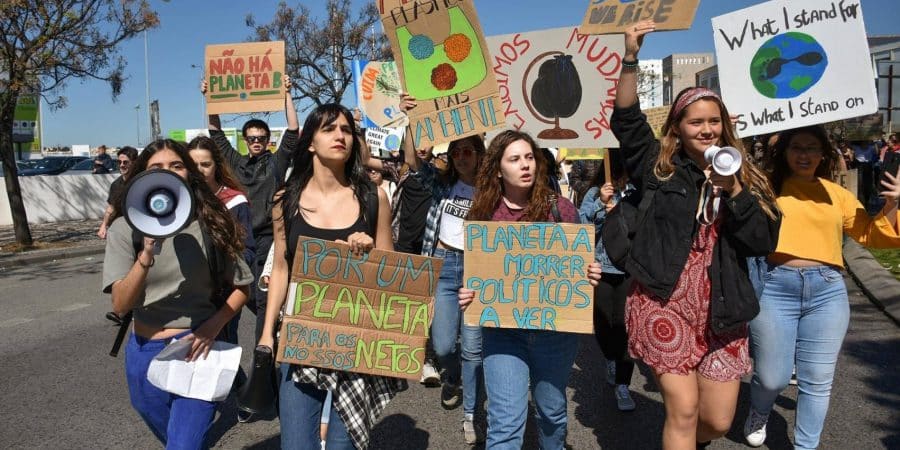 Portuguese students have joined the growing global youth movement in support of the climate.

Today in Portugal hundreds of students will be converging in various spots to raise awareness of the need to reduce emissions.

Within a week, said jubilant organisers, the movement has ‘grown exponentially’.

And the message, powered by climate change activists and inspired by one intense teenager from Sweden (see below), is to call the government’s attention to the climate crisis and demand its resolution “as a matter of priority”.

For Portugal, this is essentially a new thrust in a movement that has seen civic support increase since it became clear that the government is still intent on drilling for oil and gas in Portugal (click here).

For the rest of the world, this is a wake-up call for powermakers whose decisions are now being watched by a whole new audience.

ASPERGERS STRIPPED AWAY “SOCIAL DISTRACTIONS” and made a warrior

Greta Thunberg has a form of Asperger’s Syndrome that allows her to “strip away social distractions and focus in black and white clarity on issues”.

Her greatest concern is that despite all the so-called agreements over climate change, all the fancy conferences and ‘talk’, emissions are actually increasing.

Here activists have been warning for months that the PS Socialist government moratorium on fossil fuel exploration runs out in October.

If anything can shame politicians into pulling back from the brink it might just be the voices of our youth – and this is what they will be trying to achieve today in as many as 30 different national locations.