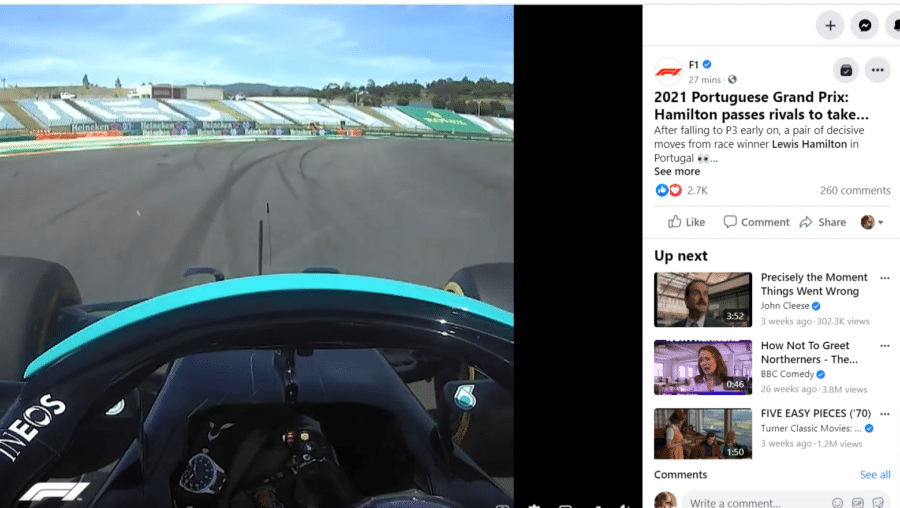 Lewis Hamilton has done it again at the Portuguese Grand Prix today in Portimão. Fighting back from third place behind Valterri Bottas (who came in third), the seven times world champion driving for Mercedes stormed to his 97th Grand Prix victory on an afternoon made all the more challenging by strong winds.

Say reports, it was “a clear demonstration of (Hamilton’s) unquenched desire to secure an eighth world title this year”.

For fans watching over television, it was pure gold.

Said the 36-year-old with a salary Wikipedia puts at €55 million: “That was such a tough race, physically and mentally. I didn’t get a good start and also lost out at the restart. But it was a great result in the end.

“Today wasn’t all perfect, and we need to get ready now for the quick turnaround for Spain”.

The F1 bandwagon will now be pulling out of a town that has seen a fraction of the usual revenue from an event of such international sporting magnitude thanks to the ravages of the pandemic.

It was only six months ago that Hamilton won the first Portuguese Grand Prix – in front of 27,000 spectators. But the ‘disorganisation’ when it came to physical distancing saw authorities vow ‘this won’t happen next time’. And it didn’t. Today’s race went ahead without the public as

Portimão is the only municipality in Portugal that is still ‘locked down’ to the point of asphyxiation. Business people have been protesting through the weekend, but nothing is likely to change until Thursday when the Council of Ministers will meet to evaluate the week’s ‘numbers’.