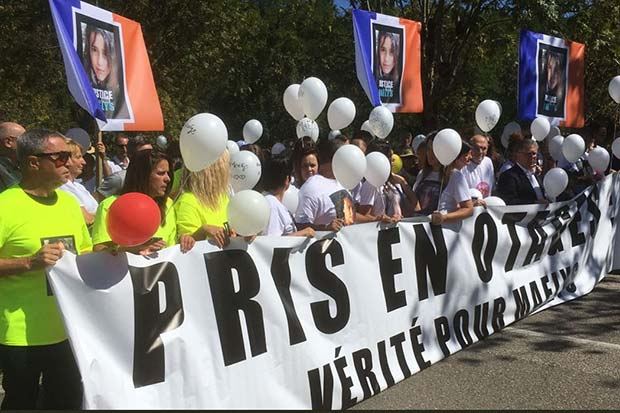 If anyone thought Portuguese justice was slow, French justice would appear to be every bit as slothful: the brutal murder of Portuguese-French child Maëlys de Araújo took place exactly a year ago in a little town in the French alps. Police caught the murderer within days (

Thus locals supporting Maëlys’ shattered family have banded together to push for closure, along with members of the Portuguese community.

The child’s body was only discovered six months later (

Said Manuel Cardia Lima, councillor of the Portuguese communities of Lyon and Marseilles: “I decided to come on the march because I have grandchildren of the same age and today was the day to stand beside the parents, give them support and share their pain”.

Lima said he also meant to “represent the community, given that the father is of Portuguese origin”.

But it was a very sombre affair, relates Lusa, with people “very withdrawn into themselves and sad” some unable to contain tears despite the horror being 12 months in the past.

Portuguese physiotherapist Joana Ferreira was among the crowd and she described how the child’s murder “shocked everyone. No one believed anything like this could happen here…”

Maëlys’ funeral took place in June, after her body was released by the authorities, but as to the trial of the former soldier accused of killing her and burying her body, this appears to have been delayed until at least December, most likely until next year.

The reasons appear to involve the man’s connection to other cases.

Since he was taken into preventive custody, Nordahl Lelandais has reportedly admitted to the killing of a 23-year-old soldier whose skull was discovered by chance by a rambler.

His name has been connected to numerous other cases (