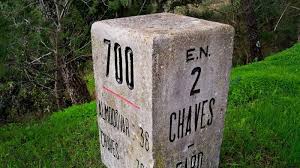 The EN2 road – the longest road in the country, linking Chaves in the north with Faro in the south – has been named one of the “best places to go in 2019” by American travel guide publisher Frommer’s.

The road, which authorities in Portugal are committed to turning into a tourist attraction, is one of the 19 suggestions made by the travel guide specialists.

Frommer’s contributor Paul Ames writes that “tourism is booming on Portugal’s sun-kissed beaches and in coastal cities like Lisbon and Porto, but canny travellers can get ahead of the crowds by exploring the beautiful, often-neglected interior”.

Ames likens the EN2 to America’s famous Route 66 highway, “offering an iconic road trip through the headlands, winding 450 miles from the Roman city of Chaves, by the Spanish border in the north, down to the balmy southern beaches of the Algarve coast”.

“The road cuts through rugged and little-visited scenery, passing four UNESCO World Heritage sites, wild mountains, elegant spa towns, pristine lakes and a string of historic towns and photogenic villages,” writes Ames, describing the Douro Valley wine region, the Casa de Mateus palace in Vila Real and the rolling plains of the Alentejo as some of the highlights.
He also stresses how the country had turned its back on its interior before the “tragedy of bush fires in 2017 led to a surge of interest in the hinterland crossed by the EN2”.

The international recognition has been welcomed by Secretary of State for Tourism Ana Mendes Godinho, who described the EN2 as the “only road in Europe” of its kind.

She also revealed that the association of municipalities of the EN2 route has a €400,000 project in the works to improve the road and its promotion.

“The EN2 is establishing itself as one of the best roads in the world and shows the authenticity of Portugal from the north to the south. We have more and more people visiting it, opening up Portugal’s touristic map and discovering the 1,001 experiences that can be found along the 700km of stunning landscapes, unique villages, irresistible river beaches, unforgettable heritage and unique gastronomy,” the secretary of state said, adding that the road is the backbone of the country.