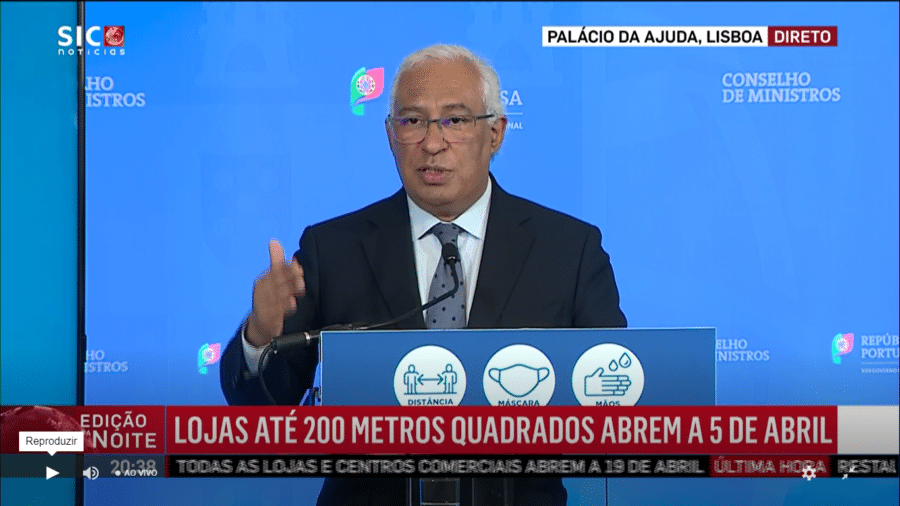 Starting on Monday (March 15), children will be going back to creches, pre-schools and primary schools; local commerce (of all kinds) can start sales from the door/ open window; hairdressers, manicure parlours and ‘similar’ can reopen, as can bookshops, auto stands, estate agents and libraries.

As has been explained during the course of this week, the idea is to open up slowly, giving two weeks between each ‘step’.

If at any point the rate of infections increases beyond 120 cases per 100,000 inhabitants, authorities will have to signal a ‘step back’, stressed Mr Costa.

The future is in the hands of each one of us, in other words. The government has a plan, it is up to citizens to help keep to it, with the vaccination roll-out, screening and testing being “complementary tools”.

The other key dates are April 5 (immediately following Easter), April 19 and May 3.

Until April 5, the country is expected to keep to the ‘rules’ of staying at home as much as possible. Weekends will remain ‘confined to boroughs of residence’ with the usual reduction in business hours until after the long weekend of Easter.

This is the point where the April 5 date comes in: at this point the secondary schools (2º and 3º ciclos) will be once again taking pupils – as will ATL (tuition centres for those ages); centres for the handicapped will reopen along with museums, monuments, palaces, art galleries ‘and similar’. Fairs and non-food related markets will also be allowed ‘by decision of municipalities’.

Shops up to 200 m2 with a door giving out onto the street can open from April 5. Cafés/ restaurants will be able to start having clients on terraces (with 4 people maximum at any table); ‘low risk sports will be allowed, as well as physical activity for groups of up to four people in the open air, and gymnasiums as long as they are not giving group classes.

Two weeks later on April 19 – and as long as the epidemiological situation remains stable with transmission remaining under an Rt rate of 1:

Throughout these weeks, measures like the wearing masks and physical distancing etc remain in force, as will the practice of remote working as much as possible for businesses.

The PM made it quite clear that the success of the government’s plan remains in the hands of its citizens – and that any hiccups along the way will have to be dealt with even if it means taking a ‘backwards step’.

Tomorrow various ministers will be announcing new measures of support for the economy and particularly sectors most damaged by the last two months of lockdown.

There may also be more on the government’s plan for a new law to allow authorities to act more rapidly if rates of infection suddenly increase (click here).

To see the government’s presentation in full (click here).