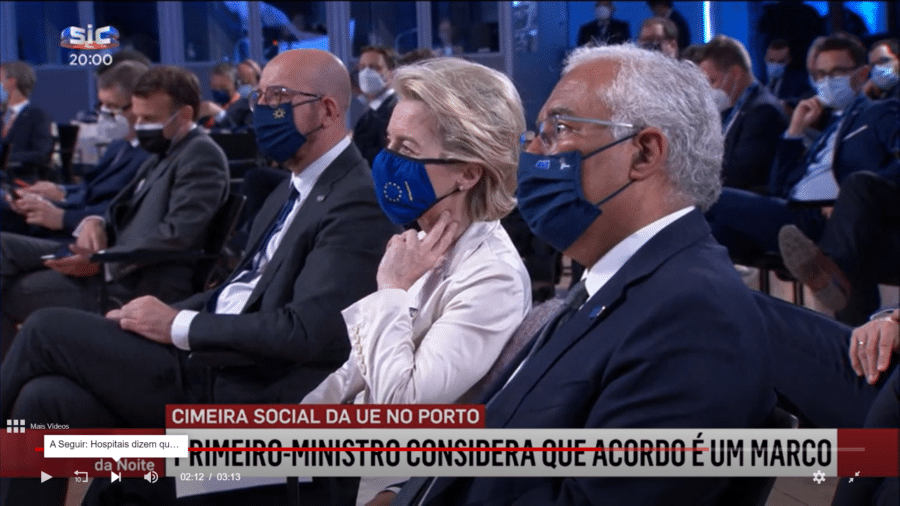 The Portuguese government’s ‘moment of glory’ during the all-too-brief six month presidency of the Council of the European Union was the EU Social Summit which took place in Porto over the last two days.

But what did the summit actually achieve?

Prime minister António Costa has told reporters: “We achieved an historic milestone. For the first time we reached a joint compromise in the execution of a plan of action for the European Pillar of Social Rights. It is the most ambitious pledge ever to have been reached”.

For critics, it was yet another occasion for a vast amount of money to be spent “without one concrete measure emerging”.

This is the take of Catarina Martins, coordinator of the left wing Bloco de Esquerda as elsewhere tabloid Correio da Manhã has done a ‘populist’ analysis of how the summit unfolded.

“Dozens of directly awarded contracts (ie contracts not put out to tender) were celebrated by the Mission Structure of the Portuguese Presidency”, says the paper. “From the anti-Covid masks to the institutional presents, passing through the food and drinks, even the carpets, cars, stages and sound systems. The bill for this party came to almost a million euros, and that is before one adds the hotel stays the heads of government prepared for the various countries’ committees”.

Police agents providing security to the event “had less luck”, says the paper. Their lunch and supper (both days) comprised juices, sandwiches and a dish of fish and potatoes.

“Very little concrete came out of the event considered one of the high points of the Portuguese presidency”, the paper echoes Ms Martins’ comments.

Soundbites emerging elsewhere have focused on Ursula Von der Leyen’s having read out a letter from a Portuguese nurse, describing how happy she was “to have been born in a country that is a member of the European Union”

But for families trying to survive on vastly reduced incomes, or people who have lost their jobs as a result of ‘response to the pandemic’, the summit won’t have changed a thing.

In that alone “it was a profound disillusion”, said Ms Martins as she led one of the numerous protests that took place in Porto yesterday.

“The European union, one of the richest economic areas in the world, has 100 million people living in poverty. There are so many people that even working cannot leave poverty – and yet there was nothing for employment or salaries in this summit”, she said.,

“During this pandemic, at the same time as the multinational digital platforms of Uber, Glovo and Amazon increasing their profits by millions and millions, the people working for them are in absolute precarity. They work 12, 14 hours per day, and even so they remain on the breadline. What has the European Union to say about this? Zero. Nothing. It’s a disgrace”.

Ms Martins very possibly put into words what many citizens could be feeling: “What we need is a fair answer to the crisis. We don’t need more fine words, we need action”, she told news stations.

To be fair, the motto of the Portuguese presidency has been “Time for Action”. Thanks to the spike in Covid infections here over January however, almost every ‘event’ planned had to take place ‘virtually’. Even the India Summit – initially broadcast as ‘the jewel in the crown’ of Portugal’s presidency – collapsed as India’s health system imploded – showing how little investment the rapidly developing country has given it.

This is not the first time reports have cast aspersions on the ‘spending’ to promote Portugal’s presidency (click here). Perhaps this was why there was no mention of President Marcelo having taken any part in the proceedings.

He did say back in March however that the event would be “an example of the concern the Portuguese presidency shares with other European countries, Spain particularly, in looking out for those who are suffering most”.

As we explained yesterday (click here), the three main targets of the summit were: