Wednesday August 17 saw the second official announcement that wildfires that have brought devastation, agony and panic to Serra da Estrela for the last 10 days are now under control. Over 24,000 hectares have been indelibly charred; orchards and trees have been destroyed, animals burnt where they stood. This has been 10 days of utter hell.

Eight water bombing planes are still active, dousing down hotspots; over 1,000 firefighters are still on the ground – but with ‘fingers tightly crossed’, authorities are declaring an end to the immediate drama.

This has been the longest running wildfire in Portugal’s living memory: one so devastating in terms of species’ damage that no-one can predict how the Serra is going to recover – even whether it can retain its UNESCO unique biosphere status in the long-term.

Public prosecutors are already investigating the causes of this fire, which began on August 6 in the ‘wee small hours’ when fires naturally do not appear.

PJ police strongly suspect arson. But could it be worse than ‘just a random act of arson’? Could the reignitions have been ‘helped on their way’? What could be the purpose of ensuring this extraordinarily rich and beautiful landscape was indelibly scarred?

Rumblings over the internet have no doubts: areas hit time and again by fires this summer have corresponded to areas earmarked for lithium mining – an activity which the government believes is pivotal for the country’s economic growth, but over which the local communities that will be affected are hugely suspicious.

Tabloid Correio da Manhã has, at time of writing, been the only newspaper to link these fires with the country’s lithium mining concessions. Even so it has done this carefully. It hasn’t cited any of the ‘conspiracy theorists’ active over social media. Instead it has quoted “ecologists” who it says “believe this to be a coincidence with no relation” to lithium mining at all.

The truth is that ‘interests’/ cartels behind and very often responsible for wildfires are never too far from the surface.

Even this summer’s firefighting strategy has been called into question by the Liga dos Bombeiros (Firefighters’ League) whose president António Nunes has openly declared: “The system has failed… We want to know what happened!”

Calling for an independent commission to go over exactly what took place in the first stages of this fire, allowing it to develop in the way that it did, he told reporters firefighters should be given the power of decision-making in these situations, not Civil Protection.

This way, “windows of opportunity that appear to reduce fires can be taken advantage of” (…) “without wasting time waiting for the decisions of diverse entities that intervene in firefighting combat”.

Firefighters need a ‘national command’, says Nunes – a body responsible for combating fires, whether they are urban, rural, industrial or in deeply forested areas, as was the case of this fire in Serra da Estrela.

Civil Protection can be responsible for coordination, by all means – but decision-making needs to be given to firefighters, he said – and the ‘authorisations process’ (for example, in actioning earthmoving machinery, to clear land ahead of advancing flames) ‘cannot wait for permission to be given by the ICNF’ (forestry institute). It has to be something firefighters can decide, then and there and see carried out.

In António Nunes’ mindset, a better strategy would be to make the ICNF responsible for everything in the form of ‘preparing forests and rural spaces for fires’ (ie ensuring there are pathways for firefighting vehicles to be able to use); the GNR should be responsible for forestry vigilance and firefighters for fire combat.

None of these changes can stop acts of arson, but they could help contain them much more effectively.

The elephant in the room here is ‘responsibility’: who is behind these fires? And can their influence stretch beyond the initial act of arson?

This is where Correio da Manhã suggests conspiracy theories have a point: “no one investigates the economic factors (criminal) that could be the origin of a fire. The word responsibility is a shipwreck no-one wants to rescue”, writes director general Eduardo Dâmaso.

“Public policies when it comes to prevention and combat are a mirage”, he says. “Civil Protection navigates the bureaucratic discourse, firefighters are left to their own devices on the ground, governments try to escape without losing popularity…” No-one joins the dots. “Where are we going with this social and political immobility?” Dâmaso queries.

It is as brave a comment piece as a national paper will possibly allow.

On anti-mining and climate awareness sites the language is more direct. “Fires? Nothing to see here…” quips one commentator (in English) alluding to “the lack of correct coordination not only to stop these types of occurrences, but also when it comes to effective prevention.

“There have been many allegations by firefighters that instructions have been “LET IT BURN” coming from those in decision-making positions”, says the post – which is absolutely correct. The ‘tactical fire’ technique has been hugely criticised this year by firefighters, but Civil Protection bosses have insisted on using it.

Portuguese commentators have been more pithy about the possible interests behind these fires: “There is great interest that a fire that starts at 3am in a lithium prospecting area does not end so soon”, says one, while another remarks: “How curious that fires always start in areas where the land has something valuable…” 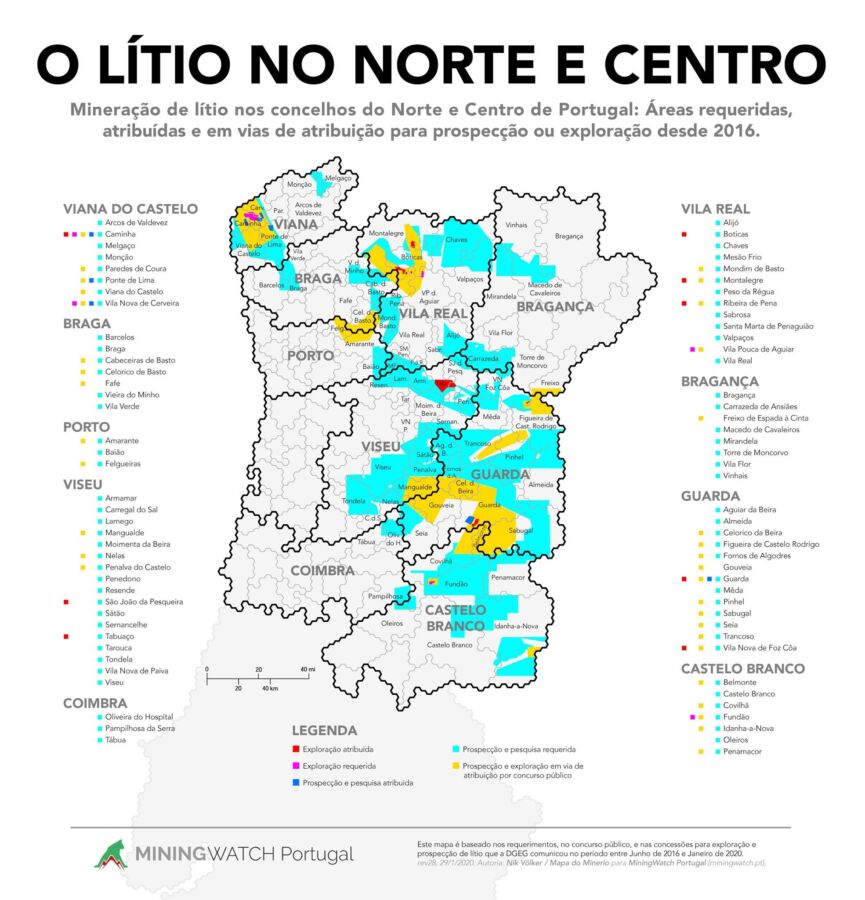 Coincidence? Possibly. Will investigations ever get to the truth? Unlikely.

One absolute in this creepy scenario is that lithium mining implies the use of ‘vast quantities’ of water, which Portugal just does not possess. How utterly tragic it would be if the landscape was ravaged for an activity that won’t even be possible in the end, because of climate change.