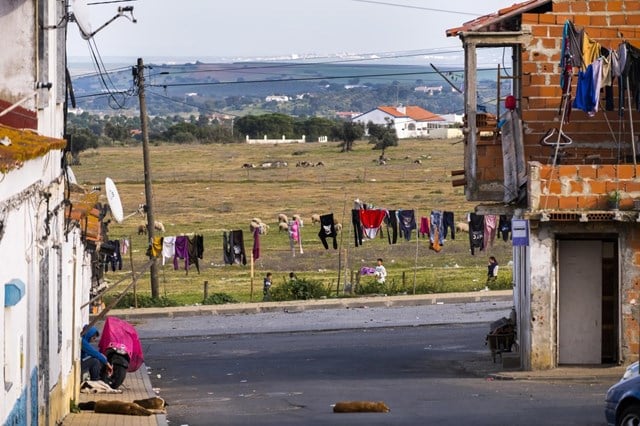 The crisis brought by the pandemic has facilitated the return of illegal homes, writes Expresso this weekend – particularly in large cities.

“Shacks, camps, pre-fabricated buildings, even commercial premises transformed into unlicensed lodging are the new homes by those disinherited by the pandemic.

In saying there have been “another 11,000” such homes in the last three years, this actually brings the running total to 24,723.

“The number could be even higher”, says the paper.

Missing data includes the results of both the last Census, and the economic crisis provoked by the pandemic.

“The phenomenon continues throughout the country, with a tendency to increase”.

In Beja, for example, clandestine homes have increased by 79.4% in the last eight years. This translates into 767 families living in a mixture of shacks or camps and caravans (this particular data supplied by the Portuguese association of gypsy mediators).

Gaia (830 illegal homes); Almada (700); Odemira and Vila Nova de Milfontes (120); Braga (735); Sintra (1,300) and Lisbon (8,614)… The list just goes on. And these are not homes exclusive to gypsies. Areas like the Algarve and coastal Alentejo have seen an explosion of unlicensed properties in rural settings (where homes are not even authorised), says the paper.

According to architect Tiago Mota Saraiva, the pandemic/ economic crisis is to blame. It has increased the number of families “without money to pay rent, and/ or incapable of obtaining social housing”, he explains.

The worst of Expresso’s story is that there appear to be no easy solutions. In fact, clandestine homes are not simply created by the people living in them, but by clandestine builders: contractors who “act on the margins of the law”, Reis Campos, president of AICCOPN, the association of civil construction industries and public works, explains.

In an inquiry led by the sector, AICCOPN “estimated that two out of every five companies act on the edge of legality, without complying with necessary legal requirements”.

These lapses include companies building residential properties without an ‘alvará’ (which is the licence needed to ensure that what they have built is ‘legal’).