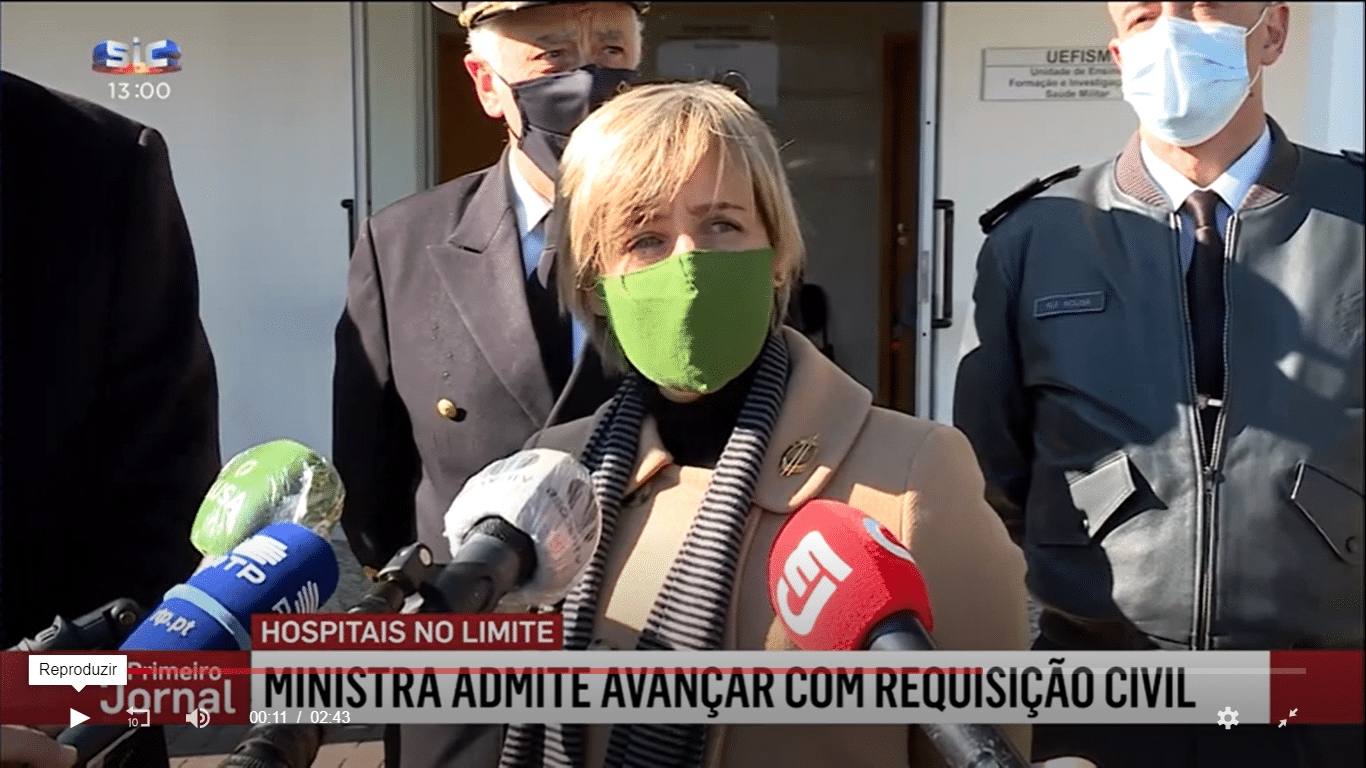 With hospitals everywhere reaching their limit, health minister Marta Temido has today ‘admitted advancing with a civil requisition’, meaning the government would ‘take over private hospitals’ in order to treat the spiralling number of patients.

Explain reports, the Lisbon/ Vale do Tejo area is the worst affected. But hospitals in the centre and north are starting to feel the mounting pressure. Staff too are ‘at the limits of exhaustion’.

Said Ms Temido today: “We will not hesitate to activate this mechanism (civil requisition) when we can’t cope with the difficulties. By agreement, obviously, and with just compensation. Above everything else, our job is to respond (to the needs) of the Portuguese”.

Last week’s relentless increase in the number of people being admitted to hospital is expected to replicate again this week.

Indeed, SIC television news says predictions are for “an even greater number of hospital admissions”.

“Marta Temido wants the health system to be coordinated to assure there are no response failures at crisis point”, said the channel during its lunchtime bulletin. “She doesn’t dismiss the idea of advancing with a civil requisition. This at a time in which health professionals have all begun to show signs of exhaustion”.

To give an idea of the critical situation in hospitals, SIC describes Lisbon’s Hospital Beatriz Ângelo which had expected to have 68 Covid beds at a ‘maximum level of contingency’.

Today it has 145 people interned with the virus. Intensive care has only two beds available: nine patients have already had to be transferred to hospitals in the north.

Even the field hospital reconstructed in Portimão Arena last weekend started receiving patients transferred from Lisbon the moment it opened for business.

The capital’s major hospitals, São José, Curry Cabral and Dona Estefânia, are all in a similar situation of strain.

Amadora-Sintra – a hospital that is traditionally overly busy – requested permission to refuse entry to ‘non-urgent’ patients over the weekend, and was denied the possibility (on the basis the “all other hospitals in the region are in the same situation”).

As of today, Amadora-Sintra has only six beds left for general Covid cases, three in intensive care.

The situation is ‘more stable’ in Porto, says SIC, but the number of new admissions has been climbing for the last three days – and the increase is expected to continue through this week.

The Resident has received a lot of mail asking why Covid fatalities are not listed by ages and ‘compound morbidities’: the simple answer is that this information is very rarely released.