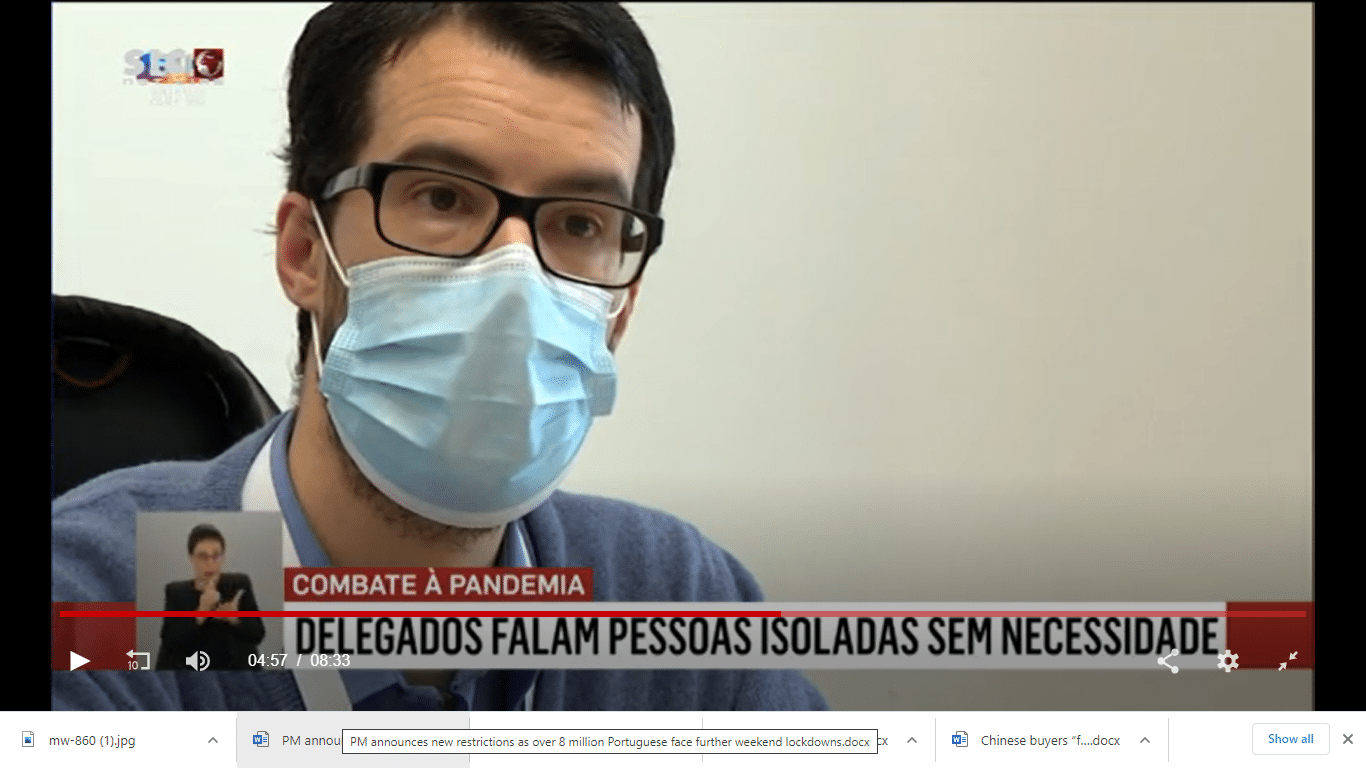 This is the message comes from the country’s overworked ‘Covid detectives’ – better known as ‘health delegates – who say the last nine months have taken their capabilities “to the limit”.

The primary job of health delegates during the pandemic has been to conduct ‘epidemiological inquiries’ into all confirmed cases.

This involves ‘hundreds of phone calls every day’.

But during the marathon of questioning, people who learn they have been in contact with someone who has subsequently tested positive for Covid-19 often call the SNS LinhaSaude24 helpline themselves (before being contacted by a health delegate), and are invariably told to self-isolate.

The problem with this advice is that the helpline service doesn’t ask the kind of questions health delegates use to determine whether someone has been a ‘high risk contact’ or one that would essentially be considered ‘low risk’.

If the latter situation is the case, there is no reason for the person to self-isolate – unless of course they are manifesting Covid-type symptoms.

But because of what a report by SIC television describes as “confusion installed by Linha Saude24” dozens of low-risk cases – if not hundreds or indeed thousands – are being placed in isolation “without necessity” every single day.

The predicament is a perfect storm powered by chronic understaffing.

Said health delegate Teresa Sabino, working in the borough of Espinho with  ‘extremely elevated’ infection rates (over 960 people per 100,000), there has been “no way of accompanying the (recent) rhythm of infections”, which she described as ‘an explosion’ (click here). Portugal’s health detectives simply can’t keep up. Ms Sabino told SIC that to do so her department would need “more than 100 people”: it has 40.

It’s at this point that one can understand the statistic supplied last week by medicine’s authority Infarmed that “the origin of 81.4% of cases” remains unestablished. There simply isn’t the infrastructure in place for detective work to be done properly.

Another major stumbling block has been people’s own memories. Asking someone to try and recall their movements over the last 14 days is no small task, health delegate Gustavo Coelho – responsible for the ‘very high risk’ borough of Chaves – explains. Sometimes people simply cannot remember, thus contacts that could be ‘high risk’ may be slipping through the ‘net’.

But the most glaring reason for missing high risk contacts is what Gustavo Coelho dubs “the rubbish” coming in from the Trace Covid system. This “rubbish” he says is largely pointless lists of ‘low risk contacts’ supplied by LinhaSaude24.

“I have situations where people have been put into isolation by SNS LinhaSaude for being in touch with a person who tested positive a month later” (meaning a month after the people had had their ‘contact’).

“We are here now in this room”, he told SIC’s interviewer. “None of us is coughing. If in one month’s time I have Covid, you would not have to self-isolate – nor would you need to call the helpline to say you had been in touch with me a month previously. But if, God forbid, you did (call the helpline) you would be told unnecessarily to self-isolate… and this doesn’t make any sense.”

Even more ‘nonsensical’ is the fact that in going into isolation, low-risk contacts often wait for a call from a health delegate which, Mr Coelho stressed, he might never make (as there would be no reason…)

It’s just another indication of the ‘disorientation at play’ that is not helping the country win this ‘marathon’.

Other soundbites over the weekend have described ‘thousands of elderly people and those with chronic illnesses’ still finding it impossible to get the flu vaccine this year – even though an ‘early vaccination programme’ is ostensibly underway.

It suggests the statements by health minister Marta Temido that Portugal will be ready to roll out the Covid vaccine in January (irrespective of the huge logistical problems this raises, not least in terms of refrigeration) may be a tad optimistic.

Meantime, the health delegates continue their arduous work tracking contacts of people who have tested positive, telling SIC that they feel ‘forgotten’ and underappreciated.