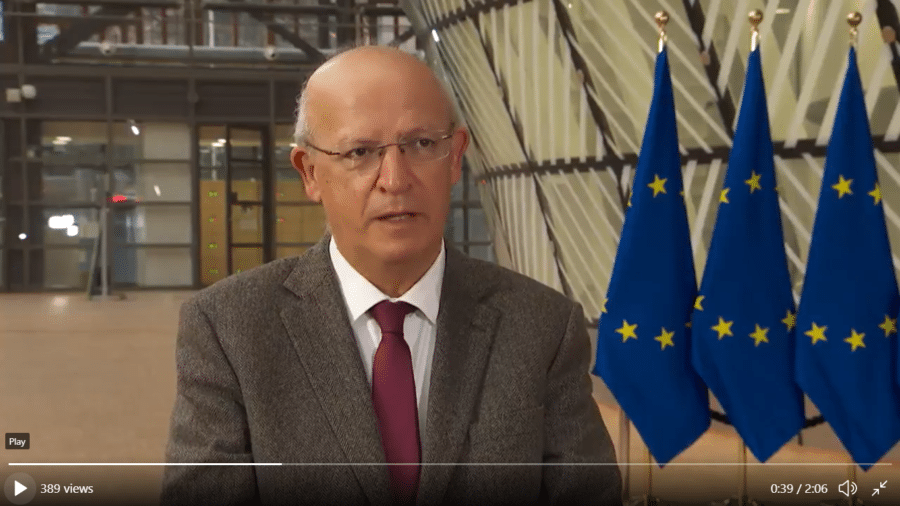 Portugal’s head of diplomacy Augusto Santos Silva has given a curious press conference on relationships with China following yesterday’s meeting of the European Union’s Council of Ministers of Foreign Affairs.

Europe “has to make this (evaluation) clear” in its relations now with China, while “supporting all those who are fighting in institutions today in Hong Kong for the preservation of the democratic space and the ‘one country, two systems’ system”, he said.

Underlying Europe’s ‘multidimensional relationship’ with China, the minister stressed that Beijing is seen as “an indispensable partner” when it comes to ‘climate action’ and ‘energetic translation’ – as without China’s cooperation, it will be impossible to comply with the objectives of the Paris Accord.

But in other areas of cooperation – like “questions of global health”, the “fight against terrorism” and “development of physical and connectivity infrastructures” – Beijing is very much “a selective partner”.

Then there are the “areas and regions in which European influence competes with Chinese influence” – whether from an economic point of view, or a political one.

Finally there are “institutional questions” where Europe actually sees China as a “systemic rival” because “manifestly” the concept of “a State of Law, individual liberties, human rights, political institutions, the role of the media” are not only “very different” but “contradictory” between countries of the EU and China.

“It is this complexity that leads our relationship with China”, said the minister, explaining how on one hand Europe might negotiate agreements over ‘reciprocal protection of investments’, for example, but on the other will criticise China for “the most grotesque human rights violations that are taking place in Xinjiang province” against the Uigures, or the deterioration of the political and institutional situation in Hong Kong.

Mr Santos Silva added that European diplomatic leaders were able to ‘discuss the Chinese question’ (via video link) yesterday with the new United States secretary of state Anthony Blinken, to hear “the United States does not seek any conflict with China” though it is “not willing to reduce its pressure in respect of the compliance with human rights, freedom of navigation in the South China sea and other dimensions”.

Going into the meeting yesterday (see image above), Mr Santos Silva told reporters it would be a very important one from the point of view that European foreign ministers are elaborating a document known as ‘the Strategic Compass’ which will guide the European Union’s strategic concerning security and defence.