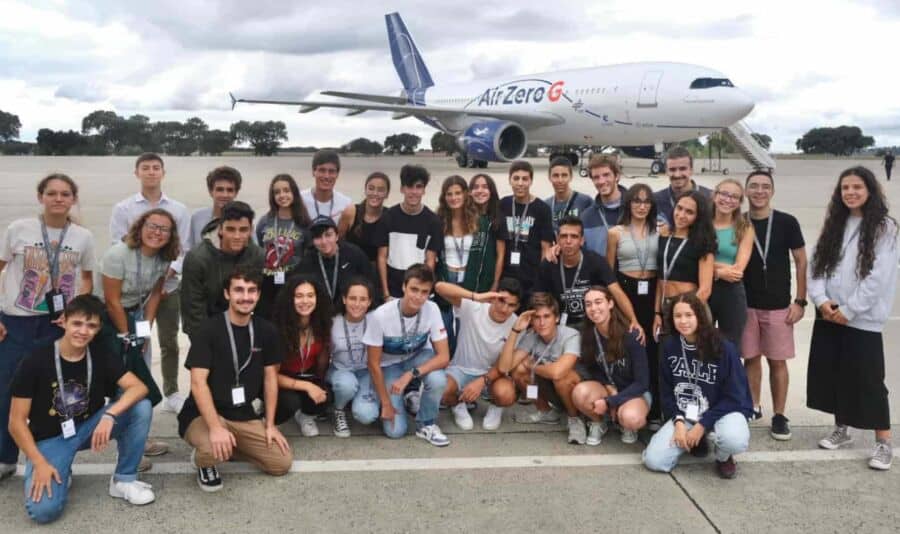 The first parabolic flight made in Portugal, with 30 young people on board, took place successfully on Friday from the Beja Air Base, where it landed at 12:02, about two hours after take-off.

The flight was promoted by the Portuguese space agency Portugal Space, as part of the “Zero-G Portugal – Astronaut for a Day” initiative, which aims to stimulate young people’s interest in space.

The plane in which the youngsters flew, an Airbus A310, owned by the French company Novespace, which operated the flight over the Portuguese coast, in a reserved area of the airspace, executed climb and free-fall manoeuvres (parabolas) that allowed to simulate the absence of gravity inside for short cycles, in which the passengers felt so light that they could easily do somersaults in the air.

Parabolic flights are practically the only means on Earth capable of reproducing the effect of the absence of gravity or microgravity, which only exists in space and is only felt by astronauts.

The young people, students between 14 and 18 years old, were selected after qualifying exams, and after landing, they will receive a participation certificate.

On board the plane that carried out the manoeuvres off Monte Real was German astronaut Mattias Maurer, who on May 6 returned from a six-month mission, his first, to the international space station, which he called a “cosmic kiss”, out of “love for space”.

The flight also allowed passengers to feel the effect of gravity on Mars and the Moon, but also the hyperactivity in which people feel heavier to the point of not even being able to lift an arm when lying on the ground.

In all, the Novespace company plane performed 16 parabolas (one more than planned at the request of the youngsters), which cumulatively made up about seven minutes of microgravity effect, including 20 seconds of Martian gravity and 40 seconds of lunar gravity.

Dozens of the youngsters’ relatives watched the take-off and landing of the Airbus A310 in a hangar near the runway. LUSA