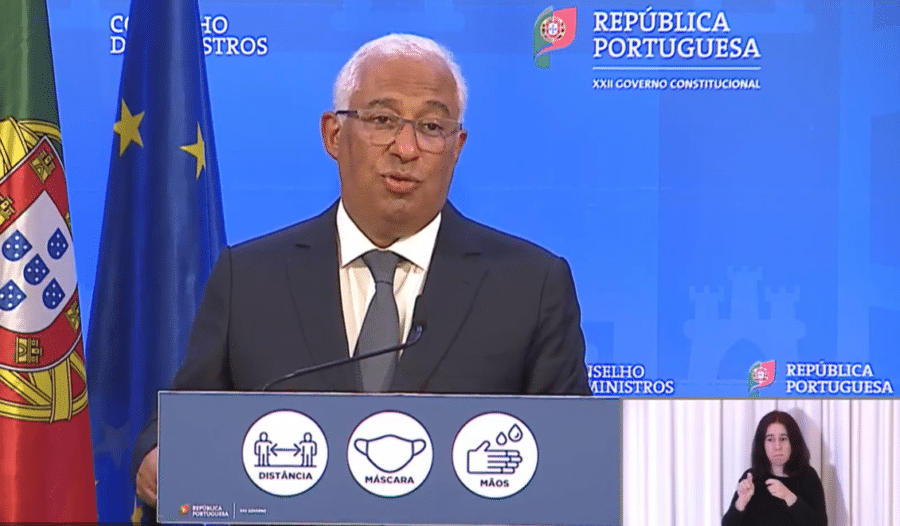 April 5 here we come: Portugal’s prime minister António Costa has this afternoon signalled the ‘off’ for step two of Portugal’s slow deconfinement process.

19 boroughs remain ‘under warning’, four of them in the Algarve – their numbers far from ideal, the next two weeks will be crucial.

Said the PM who seems to have taken the immediate fall-out of his snub to parliament yesterday in his stride: “if in the next two successive evaluations the same boroughs remain above the level of risk, deconfinement won’t advance in those boroughs…”

Right now there are 19 boroughs in this situation, three of which are the Algarve towns of Albufeira, Lagoa and Vila do Bispo.

The other boroughs showing a case count of between 120-240 per 100,000 are Alandroal, Beja, Borbam, Cinfães, Figueira da Foz Figueiró dos Vinhos, Marinha Grande, Penela, Soure and Vimioso. Even worse (ie registering more than 240 cases per 100,000) are: Carregal do Sal, Moura, Odemira, the Algarve’s Portimão, Ribeira de Pena and Rio Maior.

According to Mr Costa, if these boroughs’ numbers do not improve in the next two weeks, there will be ‘particular measures’ brought in for them, “and surrounding boroughs” (meaning much larger swathes of the country stand to be affected).

But for now it’s a case of giving populations the ‘benefit of the doubt’ and letting further aspects of everyday life start to breathe again.

The PM gave some extra details about Monday. Although the reopening begins from the morning, the confinement in force keeping people within their boroughs of residence is set to last ‘until the end of Monday’.

Any public events in the pipeline (football matches, the next Grand Prix F1 event in the Algarve, as well as MotoGP) will be going ahead without any public in the stands.

Stressed Mr Costa “events with the public are an increased risk… this is why they have to be avoided”.

Thus the country is stepping forwards as one but it is clear that the April 19 step of deconfinement may not be common to all.

Re-emphasising entreaties to keep Easter small, quiet, within the family group, Mr Costa said: “I renew the appeal to everyone to make the effort to ensure this Easter isn’t an unhappy Easter”.

What has become clear is that the weekend borough lockdowns that have been in place for weeks now will not be in force over the next two weeks – meaning people can travel outside their areas of residence on Saturdays and Sundays from and including April 10.

Reaction from other parties to PS snub over extra social support

24-hours has seen national politics move at such speed that there has been little time to evaluate the repercussions of yesterday’s snub to parliament in which the PS insisted on  challenging three diplomas designed to extend social support measures (click here).

But all parties have registered their discontent – in some cases more strident than others – and the need for the government to behave with more humility in future, and be more open to dialogue.

The main criticism of the PS determination is that the party is behaving as if it has a majority (which it doesn’t).

Chega (which for a party with only one MP gets a huge amount of column inches) said yesterday’s decision leaves the government ‘more isolated’ and puts Mr Costa on a collision course with President Marcelo.

PAN has said the decision shows PS ‘obstinacy’ and failure to dialogue; Bloco de Esquerda claims it is all part of a political game – in which 130,000 people’s security and tranquility is being ‘sacrificed’; CDS-PP believes the whole episode has shown the “greatest gesture of political bankruptcy”; PCP communists call it “a mistake” – and PSD centre-right says the PS now needs to come up with ‘creative solutions’ to the problems of Portuguese citizens: parliament did its work; the president promulgated the diplomas, and the PS has exercised its right to appeal to the Constitutional Court. But the problems facing everyday citizens remain the same, ergo: this is not over.

The three diplomas in question paved the way for ‘managing partners and independent workers’ to be included in the government’s social support measures; an increase in support for parents in remote working and an extension of ‘exceptional measures for health professionals in recovery from non-Covid related illnesses’.