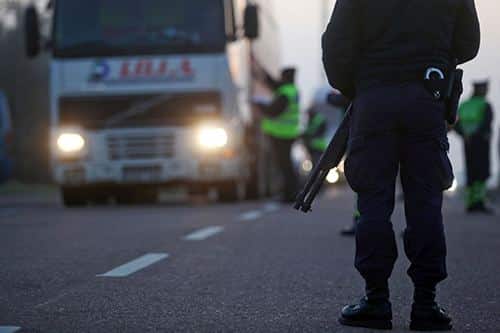 Portugal’s borders are not ‘safe’. The warning – sounded by frontiers agency SEF – comes as elsewhere in Europe countries are adopting strict controls that put the whole concept of “free circulation” at risk. But here, we still have borders that anyone can cross, no matter who they are or where they have come from.

The grim reality has been spelled out by SEF’s syndicate of unions which affirms there are “periodic security failings” up and down the country due to chronic staff shortages.

Pereira sounded the alert on the day 45 new recruits were due to start being trained to help fill the gaps, but even so, he said, the issue is one of “national security” and faced with today’s global threat of terrorism alongside Europe’s migrant crisis, it is “serious”.

The 45 new men coming in are just “a drop in the ocean” of what SEF needs to control Portugal’s borders, Pereira explained the day before SEF representatives were due to meet the new minister for internal administration.

According to DN, the meeting has been called for SEF to be able to give chapter and verse on “concrete cases” in which the country’s security has fallen through lack of available manpower.

Also to be discussed are those “minor airport and maritime frontiers” that suffer most from “periodic lapses” of cover.

These are not thought to include key posts, like those in Vilar Formoso and Caia, but they could very easily stretch to the frontier posts that SEF manages from Alcântara docks in Lisbon, to the ports of Leixões, Setúbal, Viana do Castelo, Sines, Figueira da Foz, Aveiro, Sesimbra, Peniche, Cascais, Nazaré, Olhão/Faro, Vilamoura, Portimão and Lagos.

Also potentially vulnerable are ports in Madeira and the Azores, writes DN.

“Some of the departments close at night. In others, staff work double-shifts,” Pereira told the paper. The result is that “there are controls that are not performed”, and delays in other departments, like the authorisation of residency visas for investment – another term for Portugal’s once-lauded Golden Visa programme, which has run into endless bureaucratic problems since police started investigating allegations of corruption, and now has a massive backlog of cases awaiting action.

As if SEF’s problems weren’t enough, the centres created for illegal immigrants detected during border controls are now described as “at breaking point”.

Since the Paris terror attacks in November, SEF has launched “dozens of preventive actions” targeting Portugal’s borders, and resulting in the detention of enough people to fill the four holding centres the country has in Porto, Lisbon and Faro, writes DN.

The spaces are “filled principally with Indian citizens, Pakistanis, Bangladeshis, Iranians and people from Guinea”, DN reported before Christmas – and there are now moves to create a new centre in Elvas to help with demand.
The saving grace here, explains DN, is that SEF’s “preventive actions” are slowing, and therefore the number of people being detected and then held pending inquiries is dropping.

Adding to the general unease over Portugal’s ability to control its borders, comes a shock report commissioned by the Justice ministry that concludes the country also has few defences when it comes to the financing of Islamic terrorism.

Casinos, lawyers and notaries offices, property sales businesses and even banks are “easy targets for money laundering”, claims DN, stressing that while risks are “not elevated”, the study’s conclusions “show the country could be the focus of new operational developments, whether these involve attacks abroad or on foreign targets executed on national soil”.

The situation, adds the Observatory of Security, Organised Criminality and Terrorism (OSCOT), comes from Portugal’s “geostrategic position” in Europe (so close to North Africa), as well as because it is a member of the EU and “frontally condemns acts by Daesh or Al-Qaeda”.

On the case for the last two years, OSCOT’s president Rui Pereira adds: “Despite the Islamic community here in Portugal being composed by well-integrated people, we cannot and must not exclude (the possibility) that they could have the temptation to finance terrorist activities.”

The article in DN gives ratings as to the likelihood of risks being run in Portugal. For example, banks and other financial institutions show a “medium” risk of financing terrorism and money-laundering, while the property sales sector, along with “the activity of notaries”, is considered “very high”.

More moderate, says DN, are risks posed “by the activity practised in casinos, by lawyers and solicitors”.

The report followed news over the weekend that the threat of terrorism has left also the nation’s conventional police forces “exhausted and short-staffed”.

“Hundreds of police” were described as up in arms over demands to patrol areas with high numbers of tourists in Lisbon and Porto, with legal experts affirming that the situation “cannot be controlled by national security forces alone”.

“We need to appeal for help from countries accustomed to these operations of internal security,” lawyer Paulo Saragoça da Matta told DN.