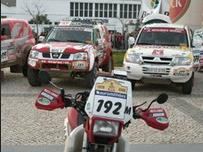 DRIVERS TAKING part in the Lisbon-Dakar Rally began arriving in Portimão during the morning of the last day of 2005 and were met by hordes of spectators eager to catch a glimpse of the vehicles.

New Year festivities kicked off at around 11am down by the waterfront, including a range of street entertainment, inflatables, jugglers and a mock mediaeval village. Live music followed later, including a performance by popular Portuguese singer Tony Carreira. A major fireworks show took place at midnight, with rockets launched from 12 different points in the borough. According to recent negotiations and statements issued by organisers, João Lagos Sports, the rally will return to Portugal and to the capital for the next three years. Portimão council is hoping the borough will be approached to be included in the event once more.