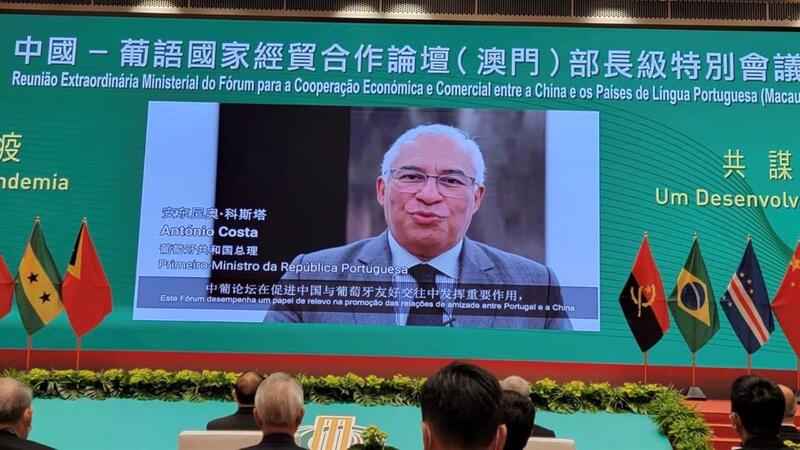 This was the message coming today at the virtual opening of the first Forum Macau to be held since 2016 (the last meeting having been postponed due to the pandemic).

The declarations of prime minister António Costa came during the ‘opening ceremony’ of forum, under the theme “A world without pandemics, a common development“.

Said Diário de Notícias: “António Costa asked for a better management of the fund… more consequent in its rules and how it functions”.

Citing “diplomatic relations and the ‘friendship’ between Lisbon and Beijing”, the PM “defended that a recovery of economies hit by the impact of the Covid-19 pandemic and the invasion of Ukraine requires other stimuli and results” as well as the exploration of “new opportunities”.

Portugal “is a point of entry for the European Union” and other markets like Latin America and Africa, due to their proximity to other Portuguese-speaking countries, he added.

The PM’s focus was one that has been championed by Portugal’s ambassador in Beijing, José Augusto Duarte, who told Lusa before the conference that the fund needs “greater dynamism” to ensure productive projects for local economies.

According to Forum Macau, the fund has already enabled almost €4 billion in Chinese investment projects in Portuguese-speaking countries.

The problem seems to be that it has not been geared towards small or medium-sized enterprises.

President of the International Trade Association for Lusophone Markets (ACIML), Eduardo Ambrósio, based in Macau, told Lusa that as a result, the mechanism has been “very little used”.

“The minimum loan is five million dollars [4.6 million euros] and that only represents 20% of the value of the total investment of a project”, he said.

This is a “very high amount for small and medium-sized enterprises in Macau.”

Hopes are therefore that a revision of the rules will change what José Augusto Duarte calls the “conditioned use” of this fund, and help power investment/ recovery.

According to data made public, the fund (created by the China Development Bank and the Macau Industrial and Commercial Development Fund) has so far approved three projects, in Mozambique, Angola and Brazil.

Chinese PM Li Keqiang gave what were described as “three proposals for Sino-Lusophone cooperation to be reinforced in face of global uncertainty and instability”.

The first appears to have been “defending peace and stability” in a moment of “conflicts and chaos in the lives of people”; the second “maintaining joint efforts to beat the pandemic” and the third “persisting on openness and cooperation” especially in the context of the Macau Forum which today inaugurated the China-Portuguese-speaking Countries Exchange Centre for Epidemic Prevention”.

These proposals/ provisos are not clear-cut, in that while Portugal (along with other European countries) is seeking to ‘live with SARS-CoV-2’ and ease away from talk of a pandemic, China is still operating a zero-tolerance policy – even removing children from their families, in the name of ‘beating it’.

Thus what exactly the Chinese PM meant in “maintaining joint efforts” is a little ambiguous.