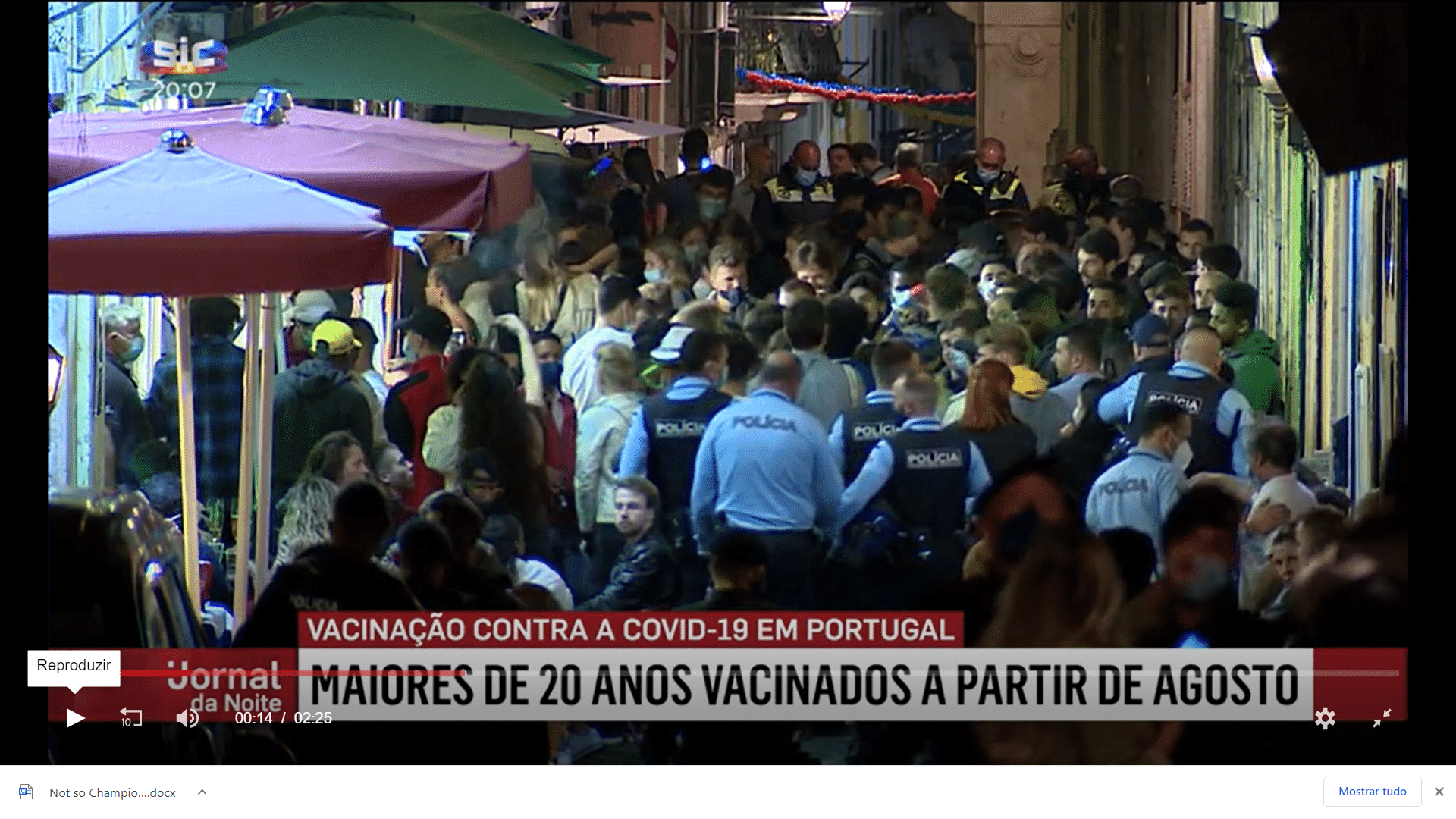 Only days before, EMA, the European Medicines Agency, approved the first Covid vaccine (Pfizer’s) for children aged between 12-15.

Multiple media reports have stated these facts – but no mainstream channel seems to query them.

Only a few months ago Kate Bingham, the then head of the British government’s vaccine task force, insisted: “We just need to vaccinate everyone at risk. There is going to be no vaccination of people under 18. It is an adult only vaccine, for people over 50, focusing on health workers and care home workers and the vulnerable” (click here).

Ms Bingham has a background working with pharmaceutical companies and biotechs whereas Portugal’s ‘vaccine czar’ does not.

His focus on rolling-out Portugal’s vaccine programme has been stellar (indeed the vice-admiral has just received a Gold Medal for his efforts from the municipality of Vila Real) – but his perception of risk/benefit analysis has never been part of the job.

Kate Bingham’s, on the other hand, certainly was.

Back in October 2020, she told the Financial Times that the UK’s vaccination policy would be aimed at those “most at risk”.

Said the paper, Ms Bingham“noted that vaccinating healthy people, who are much less likely to have severe outcomes from Covid-19, ‘could cause them some freak harm’, potentially tipping the scales in terms of the risk-benefit analysis”.

This was a key statement, from a professional in charge of what has now been recognised as one of the world’s leading vaccination programmes.

It came only seven months ago. What changed to make countries pursue the ‘mass vaccination’ of healthy people?

Certainly, in Portugal, this has never been explained.

Vice-admiral Gouveia e Melo has always said that his focus is on attaining ‘herd immunity’ with 70% of people inoculated by August (in other words, before the 20-year-olds are called for their jabs).

Experts here have already admitted the virus “is probably already endemic in Portugal” (click here), and that those who become infected “will have a much more robust immune response” (click here).

But on the basis that Portugal always ‘follows Brussels’ – and EMA has now approved the roll-out of the Pfizer vaccine to 12-15 years olds – the likelihood is that after the 20-year-olds, vice-admiral Gouveia e Melo and Portuguese health authorities will move on to teenagers.

This is where it might be useful to consider the views of eminent British physicians concerned that the UK’s vaccine roll-out will move on to children from September (click here).

Going by the name the Hart Group (Hart standing for ‘health advisory and recovery team’), an Open Letter to Dr June Raine, Chief Executive of the UK’s medicines regulatory body stresses that “children do not need Covid vaccination for their own protection”, and that it would be “irresponsible and unethical” to push forwards with a vaccine roll-out for them.

“Children have a lifetime ahead of them, and their immunological and neurological systems are still in development, making them potentially more vulnerable to adverse effects than adults”, says the letter. “A number of specific concerns have been raised already, including autoimmune disease and possible effects on placentation and fertility. A recently published paper raised the possibility that mRNA COVID-19 vaccines could trigger prion-based, neurodegenerative disease. All potential risks, known and unknown, must be balanced against risks of COVID-19 itself, so a very different benefit/risk balance will apply to children than to adults”, the group continues.

This is just one of numerous warning bells being sounded as doctors consider data coming through. It has to be remembered these vaccines are essentially ‘experimental’, authorised for ’emergency use only’. Their final trials to check on longer-term side effects are not due to end before late 2022/ early 2023.

In the United States, however it is aleady clear that there have been 27 times more vaccine deaths reported since the Covid vaccines came on track than there have been in the last decade.

“As of May 14 there have been 4,144 deaths reported to the Vaccine Adverse Event Reporting System (VAERS) in 2021, compared to just 165 in all of 2020, and an average of 153 per year over the last ten years”, writes Leo Taylor in the Daily Expose today (click here). “In other words there are now just over 27 times more vaccine deaths reported than average (and we are not halfway through the year)”.

Stresses the Hart Group: “All medical interventions carry a risk of harm, so we have a duty to act with caution and proportionality. This is particularly the case when considering mass intervention in a healthy population, in which situation there must be firm evidence of benefits far greater than harms. The current, available evidence clearly shows that the risk versus benefit calculation does NOT support administering rushed and experimental COVID-19 vaccines to children, who have virtually no risk from COVID-19, yet face known and unknown risks from the vaccines”.

Right now in Portugal there is no equivalent group of health professionals sounding these warnings. Nor has there been any queries from the mainstream of the need to vaccinate younger populations with vaccines that have still not completed their full trials process.