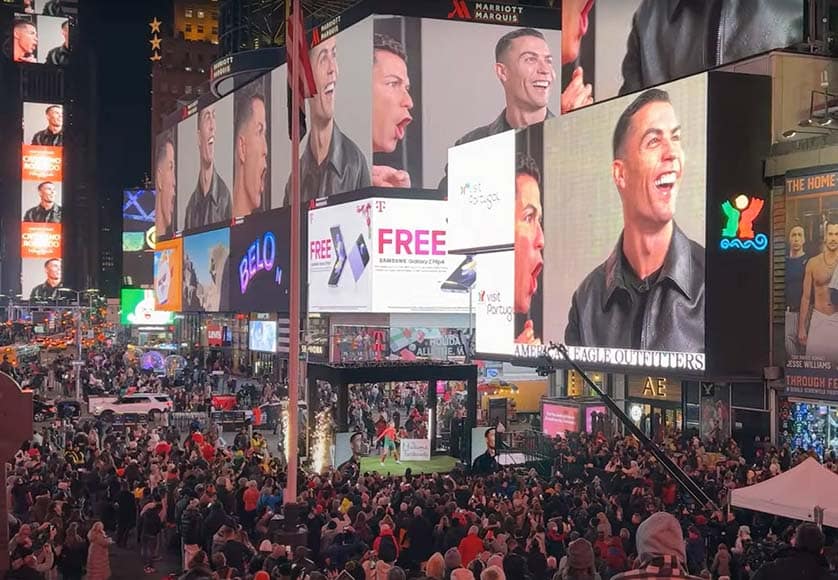 For one hour last Friday, Portugal was promoted on the digital billboards of Times Square in New York as part of a promotional campaign designed to capitalise on the American tourism ‘boom’ that the country has been enjoying recently.

Turismo de Portugal made sure to shine the spotlight on a variety of areas, from the medieval village of Óbidos and the surfing haven of Ericeira to the village of Cerdeira, famous for its schist houses.

Algarve, the main tourism region of Portugal, was not forgotten, with the focus being placed on Portimão’s Praia dos 3 Irmãos and the Sete Vales Suspensos coastal walking path in Lagoa, while the Alentejo was promoted for its wine tourism sector and the towns of Alqueva, Monsaraz and Comporta.

The ‘takeover’ of Times Square’s digital billboards started with a message from arguably Portugal’s biggest ambassador to the world: football superstar Cristiano Ronaldo, who will have his very own wax statue – which was presented at Times Square – displayed at the Madame Tussauds wax museum in London.

The campaign is called ‘Close to US’ (a play on words which takes advantage of the double-meaning of being ‘close to us’ and close to the United States) and is expected to reach 500 million people across the world.

The hope is that the campaign will help Portugal continue to grow in the American market.

As the Resident reported earlier this month, there have never been so many American tourists travelling to Portugal.

Over 204,000 American tourists visited Portugal in September, the highest number ever recorded in a single month, according to the latest data revealed by the National Statistics Institute (INE).

In fact, the USA accounted for the third largest number of tourists visiting Portugal from a single country in September, behind only the UK (262,000) and Spain (213,000).

Further data shows over 1.1 million American tourists have travelled to Portugal between January and September, an increase of around 200,000 compared to the same period in 2019 – the last ‘normal’ tourism year before the Covid-19 pandemic.

The goal of the latest campaign is to promote Portugal as “an inspiring destination which knows how to welcome” tourists. It will also focus on Portugal’s “privileged geographical position and connectivity” with North America.

‘Close to US’ will be promoted on 3,000 outdoor billboards at airports with flights to Portugal, such as JFK, La Guardia and Newark, at a time when air traffic grows considerably in the USA due to the Thanksgiving holiday.